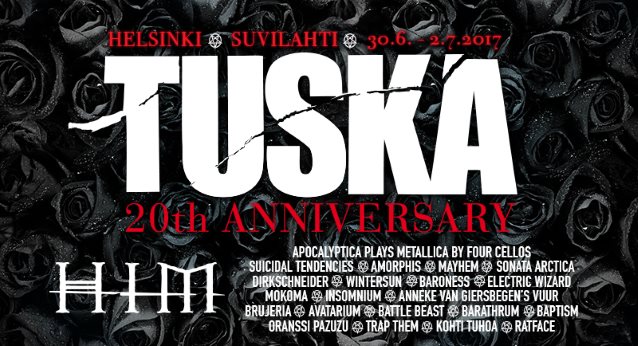 HIM, SUICIDAL TENDENCIES, MAYHEM, APOCALYPTICA, DIRKSCHNEIDER and SONATA ARCTICA are among the confirmed bands for the 20th-anniversary edition of the Tuska festival, set to take place June 30 - July 2 in Helsinki, Finland.

More bands will be announced soon.

The 2016 edition of the Tuska festival saw 28,000 fans gathered at Suvilahti, formerly an energy production area, a present-day venue for festivals, flea markets and graffiti, located in Helsinki's Sörnäinen district.

In a 2016 interview with Festicket, Tuska organizer and promoter Eeka Mäkynen stated about Finland's mainstream acceptance of the heavy metal genre: "It has been [big for] a really long time. This is our nineteenth year so I think it was about nineteen years ago that there were some really underground things going on in the true metal scene; when the guys started up the Tuska festival. That was about 1998 when we started to see that something was happening, something was 'vibrating.'"

He continued: "The first Tuska was held at a club in Helsinki with a capacity of 750, and they had two stages over two days. The guy who owned the club and ran the festival realized that it was growing and so already by the second festival it was arranged outdoors for a couple of thousand people per day. It started to blast off really quickly from then."

Asked if he thinks Tuska fans want to see a lot of Finnish music, or if they prefer to see a representation of the whole worldwide scene, Mäkynen said: "That's a really good question. It's always been sort of 50/50. Foreign people who come to the festival want to see local bands; if you come to Finland, you want to see Finnish bands, the big names like STAM1NA, MOKOMA, LORDI, CHILDREN OF BODOM. But if you're wondering how most Finnish people see Tuska, they're probably thinking about the big-name foreign bands. In Finland, it's known as an international festival. And we want to grow it bigger for the international fans and expand the whole feeling that you can come to festival, spend a weekend here, explore Helsinki and have a good trip to Finland. So that's something we've been growing in the last couple of years, and I think we're doing a good job so far."