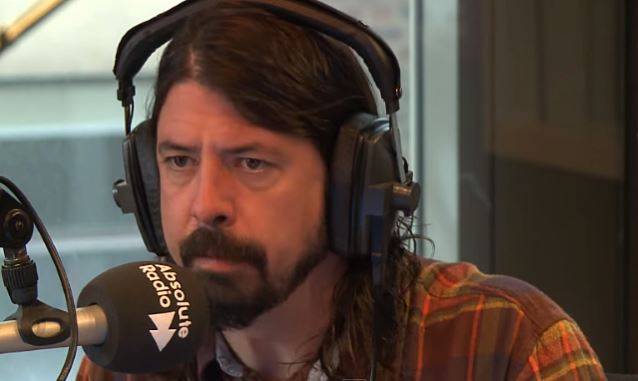 FOO FIGHTERS laid down the music for the album in cities that have a great musical history and invited local legends to contribute to the sessions as well.

The results have been chronicled in an eight-part documentary series, called "Sonic Highways", that Grohl directed. The series premiered on HBO last month.

Speaking about how the environment can affect the sound of a record, Grohl said (see video below): "Well, there's so many elements that… It could be the room, it could be the studio, it could be the board, it could be the city, it could be the accent or the tempo of the city. It could be the geography or the history or the culture of the place. So it turned into kind of a bigger conversation nof regional music — like, why did the blues go to Chicago? Or why did jazz come from New Orleans? Or [why is] Nashville the country capital? But all of these reasons happened for non-musical reasons. Blues made its way to Chicago because after black emancipation, millions of people from the South moved up North just to get work, but they took the music they were singing in the South up to Chicago, and the city changed the sound of their music. So the blues that Muddy Waters was playing in the South on the plantation was way different than what he was doing when he got up to Chicago, because he got an amplifier and it turned into Chicago blues."

He continued: "What I started dicovering is that the music from these places, the roots of it goes so deep that it's historic — there's history and there's culture, and all of these different elements influence the musical outcome of that place. Not just the studios, but the cities themselves."

According to The Pulse Of Radio, "Sonic Highways" is unlikely to topple Taylor Swift's latest effort, 1989, from the top of the Billboard 200 album chart this week. "Sonic Highways" is expected to debut at No. 2 on the chart with first-week sales of around 190,000 copies. That won't be enough to overcome Swift, whose new disc is predicted to sell around 300,000 copies to notch its third week in the top spot.

The complete chart will be released on Wednesday morning (November 19).