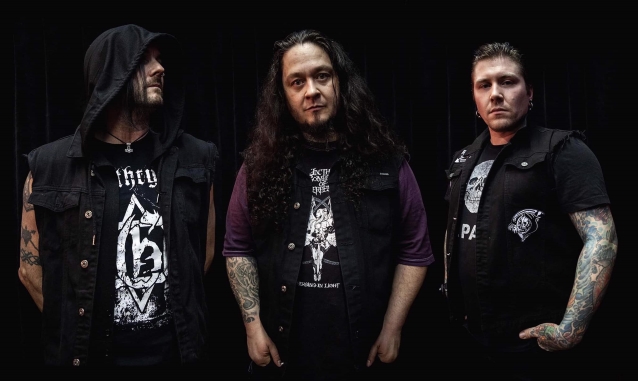 Powerhouse doom trio GODTHRYMM — featuring former members of MY DYING BRIDE and VALLENFYRE — has just released a studio performance video for its song "We Are The Dead" prior to recording their debut album.

Guitarist/vocalist Hamish Glencross states: "We are incredibly proud to share this video with you to serve as an introduction to the band whilst we are in the process of securing a deal for our debut album.

"Since forming only over a year ago, we have forged our strength as a tight, powerful live act following a couple of great festival appearances, some wonderful shows supporting such great bands as PARADISE LOST, MEMORIAM, VODUN, WITCHSORROW and PALLBEARER, as well as our own headline shows up and down the U.K. So we wanted to capture the power and energy of our live performance in a way to introduce ourselves to those unfamiliar with us (basically everybody!) So, we spent half a day in a studio in Sheffield with the very talented Nathan Bailey as producer, and we are very happy to share with you 'We Are the Dead'."