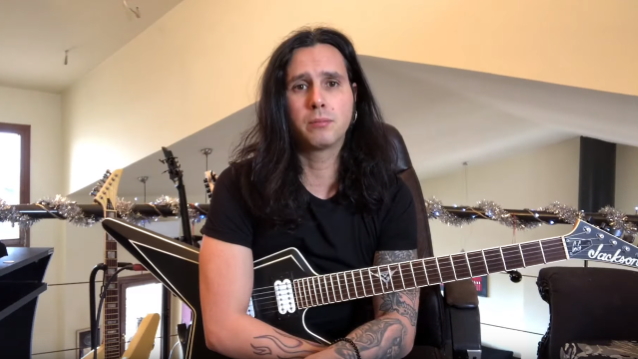 Greek guitar virtuoso Gus G., well known in rock and metal circles for his work as Ozzy Osbourne's guitarist and as leader of his own band FIREWIND, has uploaded a new YouTube video in which he shares a couple of tips and exercises for sweep picking cleanly and fast. Check it out below.

Asked how he keeps "shred guitar" interesting for the listener, Gus told Guitar World magazine: "If it's not done with a musical meaning or in some sort of musical context, it's pretty boring. That's why I admire guys like Joe Satriani who are able to basically make the guitar take on the role of a voice. But I hate guys who put out stuff that just sounds like backing tracks for them to solo over. That's why I always try to write songs. Then having a kickass solo is kind of like the cherry on top, so to speak. But you need to have a good song first."

Gus also said that he had no issues with being replaced in Ozzy's band by a returning Zakk Wylde.

"Well, there's obviously a long history between those two, so given the fact that Ozzy announced his farewell tour, I think it's cool," he said. "And after Randy Rhoads, Zakk is the most iconic guitar player he's had in his band. So it's good that Zakk is coming back. It's totally fine with me — it's not like I have a fucking choice! [Laughs] But I'm a big fan. And what can I say? I have no complaints because it's been a hell of a ride for me just playing in Ozzy's band for seven years. It was never a gig I took for granted. You just have to enjoy it while it lasts. And I'm happy it lasted as long as it did."