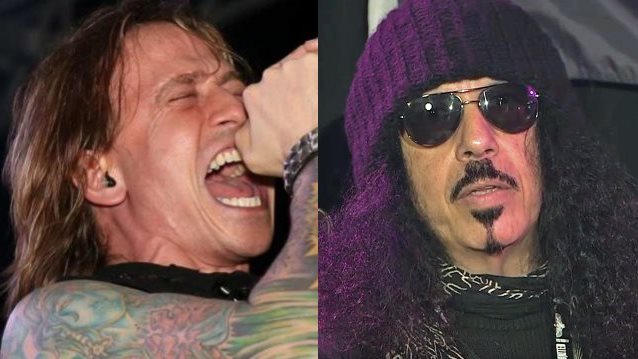 Seann Nicols says that Frankie Banali was "a nightmare to work with" during his short tenure as the lead singer of QUIET RIOT.

Nicols was with QUIET RIOT for just a few months, but long enough to record the vocals for an early version of the band's new album, "Road Rage". QUIET RIOT has since re-recorded the disc with its seventh lead singer, "American Idol" finalist James Durbin, for an August 4 release via Frontiers Music Srl.

Asked by Sleaze Roxx when things between him and QUIET RIOT started to go sour, Nicols said: "I think things started to fall apart when I approached [QUIET RIOT drummer] Frankie Banali about the record that I had written and recorded for him, and let him know that I wanted to be compensated for my work. That's when he became very adversarial and started making moves to edge me out of situations. After approaching him in the most sensitive professional way possible, he instantly got lawyers involved and everything had to be in writing on his terms. He refused to take phone calls and this was all before we had even done our first rehearsal. So I think that it was really greed and an effort from Frankie Banali to have me work for QUIET RIOT without any form of compensation for the record that ultimately caused my involvement with the band to come to an end. Now, that being said, the way that Frankie Banali acted and behaved from day one that we got together for the first rehearsal and the five shows that we played was absolutely horrific. I don't think that there could have been anything that he could have done worse in that situation other than resort to physical violence. I mean, he was just emotionally a nightmare to work with. He was verbally abusive. Every possible thing that you can do to make a person uncomfortable, he did it and it was really terrible."

Nicols also talked about QUIET RIOT's decision to release the song "The Seeker" with his vocals, only to eventually wipe out his voice from the entire "Road Rage" record and release it a few months later with Durbin's contributions.

"When Frankie decided to cut me out of the band, I had communicated to him in an e-mail, and he said that the plan was that we were just going to release the 'Road Rage' record with me on it," Seann said. "That was the original plan. So when 'The Seeker' came out, there was still a plan. It was agreed by Frankie and I am assuming the label [Frontiers Music Srl], which I did not have any contact with the label at this point. But the plan was to just put the record out with me on it and then, they would bring James Durbin in and they would do their touring and stuff. They would maybe make another record with James Durbin down the road, but at some point. I guess, Frankie and the band decided — and the label or whatnot, [judging] from their statement — that they were going to re-record all the songs with new lyrics and melodies with James Durbin, and they were going to wipe me off the entire record. This was a big injustice because I wasn't properly compensated for my work to begin with, and they were also going to try to edge me out of any type of royalties or writing credits that I was legally entitled to, which is just unethical and flat-out illegal. [Laughs] So basically, I had to get an attorney to protect myself on this issue."

He continued: "Look, if you work on a song with somebody, you become a co-writer. And then, if you take that same song and you rewrite it, you can’t just cut the person who wrote the original draft out of the equation. The fact that James Durbin is rewriting the lyrics and melodies does not eliminate me as a co-writer and co-author of those songs. So I know that Frankie Banali is making efforts to try to cover his tracks, saying he never played James Durbin my versions of those songs, but the entire record that I recorded was already released — at least in Japan — and I know that there are copies of it circulating all around the world now because it was leaked on the Internet. And 'The Seeker' had already been released."

Nicols added: "While I was very disappointed with the mix that those guys ended up putting on it, it was still enough to hear the lyrics and the melodies that I had written. Therefore, this attempt by Frankie to put a different coating on these songs and put it out there as an entirely different project without giving me proper credit or compensation is appalling, to say the least."

Banali first spoke publicly about the split with Nicols during a March 2017 interview with Billboard. He stated at the time: "After doing all of five live shows [with Nicols], it became apparent to everybody that it really wasn't going to work. There were some serious creative and personal differences. I'm not the type of person who will stay in a bad marriage for the kids — the kids in this case being QUIET RIOT. It was unanimous it could not go any further."

More recently, the drummer told The Metal Voice that he was perfectly justified in releasing "Road Rage" without Nicols' vocals. "The only thing is the same is the music because all the music had been written [without Seann's involvement]," he said. "The majority of the music was written by myself and my writing partner, Neil Citron, who's also the engineer on the record. There's one song that Alex [Grossi, guitar] wrote all the music to and there's one song that Chuck Wright [bass] had co-writing credit. But, we got rid of all the lyrics and all the vocal melodies from the first version and had James create all new lyrics and all new melodies. As a matter of fact, James, to this day, has not heard the first version of the record because I wanted to make sure he had a blank canvas and wasn't influenced one way or the other by what had preceded."

Since his exit from QUIET RIOT, Nicols played one show as the new lead singer for Bobby Blotzer's version of RATT. He has also joined the band WESTFIELD MASSACRE, which recently embarked on a U.S. headlining tour, the "North American Meltdown".