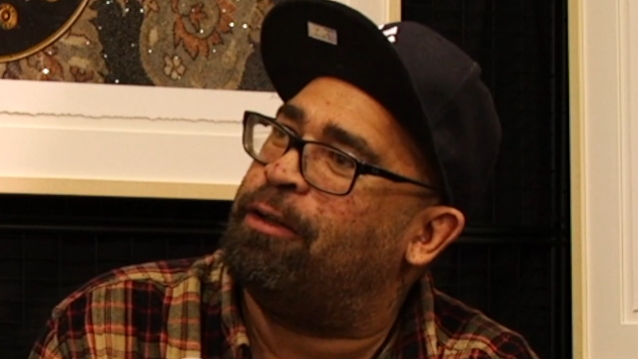 According to TMZ, former THIRD BLIND EYE bassist Jason Slater has died. His daughter, Alyssa Carlson, told the site the 49-year-old musician and produced passed away earlier today (Wednesday, December 9) from liver failure at a hospital in Maui, Hawaii. He reportedly kept his condition a secret from Alyssa, who only found out about his it last month when she got a call he had landed in the hospital.

A rep for THIRD EYE BLIND told TMZ that it "is always a sad time… when a spirited member of the music scene is taken too soon."

After his departure from THIRD BLIND EYE, Slater went on to work with a number of rock bands as a producer, including QUEENSRŸCHE, with whom he collaborated on four albums: 2005's "Operation: Mindcrime II", 2009's "American Soldier", 2011's "Dedicated To Chaos" and 2013's "Frequency Unknown", the latter of which was made by Geoff Tate's version of QUEENSRŸCHE.

Former FORBIDDEN guitarist Craig Locicero took to his social media to write: "I'm heartbroken. This hits me right in the gut.

"From the first day I met Jason at the Music Annex when FORBIDDEN was recording 'Distortion' in 1994, we hit it off. Madden and music was our bond. As time went on, Jason did some pretty amazing things in his allotted slot of life. Jason was a successful producer, engineer, record label mogul, songwriter, musician, manager and partying animal all the while. Dude lived the life of 100 men. Much of it on the edge. However, Jason's greatest strength and trait was his heart. He was full of love. Loved his family. Loved his daughter. Loved his friends. Loved us all like crazy.

"I loved him. Dearly. We spent a lot of time together over the last few years. Starting with when he pulled me in to recording the guitars on Geoff Tate's QUEENSRŸCHE record. Jason challenged me to rewrite everything that was already there on the spot. To put as much myself as I could into it. Because that's all the time we had.

"Challenge accepted. That experience made me stronger. Jason made me better. As a person and a musician. I owe him so much. He was a Brother to me.

"I will always carry some of Jason's spirit with me. I can't think of more fitting tribute than that.

"Jason... Fly upwards into the blue out of 2020. This year just got even shittier without you in it."

The world lost a force of human nature today. Jason Slater has left the building.

I’m heartbroken. This hits me right...

Sad to hear about the passing of one of my musical mentors, Jason Slater. I interned for Jason for about a year. During our time working together we composed music for TV, produced albums, and wrote tons of songs together. He will be missed. pic.twitter.com/U15WhzOMkS