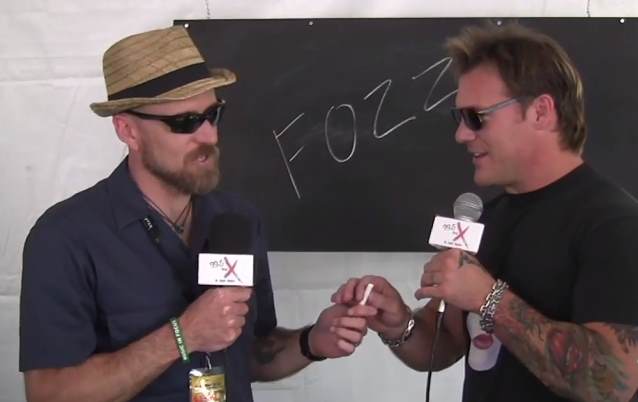 99.5 The X radio station conducted an interview with FOZZY singer and WWE wrestling superstar Chris Jericho at the Carolina Rebellion festival on May 3 at Charlotte Motor Speedway in Charlotte, North Carolina. You can now watch the chat below.

FOZZY released a new single, "Lights Go Out", on April 29 across all digital platforms. The release coincided with the track's impact at Active Rock radio, and was the first single from the band's upcoming sixth studio album, set to hit stores this summer.

The official lyric video for "Lights Go Out" can be seen below.

"'Lights Go Out' represents a brand new color in the FOZZY spectrum," says Chris Jericho of the new single. "Dark, sexy, sleek, dirty, heavy and catchy as f*ck, this song turns a whole new page in hard rock history. It doesn't matter if you dance to it in a club or mosh to it in a pit, 'Lights Go Out' will make you move!"

The band returned to the North American tour circuit in late April, where they are making crowds move on America's biggest festivals, including appearances alongside AVENGED SEVENFOLD, VOLBEAT, ROB ZOMBIE, SLAYER and more at 98 Rockfest, Welcome To Rockville, Carolina Rebellion and Rock On The Range. FOZZY is also playing dates between festivals in support of BUCKCHERRY, co-headlining with KYNG, and sharing their stage with GEMINI SYNDROME, REV THEORY, HEAVEN'S BASEMENT and Century Media Records labelmates EYES SET TO KILL.