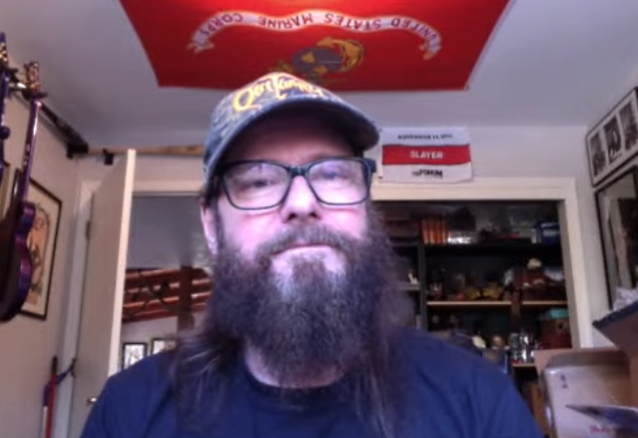 In a new interview with DEATH ANGEL's Ted Aguilar as part of the "Alive & Streaming" YouTube series, Gary Holt reflected on EXODUS's legendary New Year's Eve gig in San Francisco with METALLICA, as the two bands rang in the year 1986 along with MEGADETH and METAL CHURCH.

"We crushed METALLICA," the EXODUS guitarist said. "And look, I'm not gloating — we crushed 'em, and they knew it. It was their big homecoming. They just finished recording 'Master Of Puppets', and we came out, and we had more amps, we had a bigger riser. We came out looking like the headliners. And we were partying hard after, and James [Hetfield, METALLICA frontman] comes up, and we were just getting wasted. [And he said,] 'That'll be the last time you guys open for us.' And it was. [Laughs] We never played with METALLICA again until in the recent decade, and that was, like, festivals somewhere."

According to Holt, he still gets along great with all the members of METALLICA. "I love 'em to death, and I'll always support 'em and always give them all credit where credit's due," he said. "I consider 'Master Of Puppets' the greatest metal album ever made. Nobody's ever come up with anything close to it. Maybe close would be JUDAS PRIEST 'Stained Class'. But I give 'em all respect. Even with 'St. Anger', I always said, yeah, if they made it sound right, it wouldn't be so bad. [I saw a thing] on YouTube, some guy re-recorded the whole album, but did it with a proper drum sound and guitar sound, and the songs are killer… I never listened to 'Lulu', because I don't want it to sully my opinion of the band I admire so much. [Laughs]"

"Lulu", METALLICA's controversial collaborative disc with Lou Reed, polarized fans around the world and earned the band some of the most scathing reviews of its career. The effort featured the late THE VELVET UNDERGROUND frontman's spoken-word poetry and lyrics combined with METALLICA's musical assault for a jarring experience that didn't sound like anything METALLICA had ever attempted before.

EXODUS recently completed work on its new album, "Persona Non Grata", for a tentative summer release via Nuclear Blast. It will be the follow-up to 2014's "Blood In Blood Out", which was the San Francisco Bay Area thrashers' first release since the departure of the group's lead singer of nine years, Rob Dukes, and the return of Steve "Zetro" Souza, who previously fronted EXODUS from 1986 to 1993 and from 2002 to 2004.