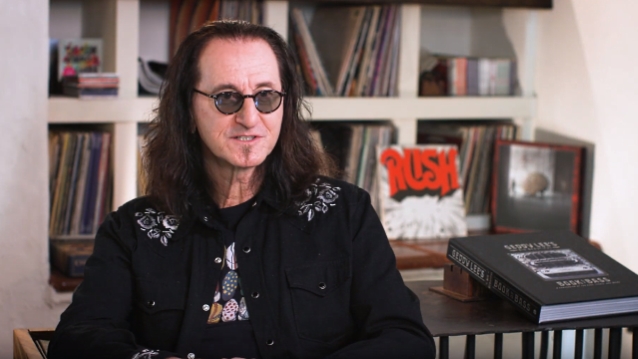 Geddy Lee of Candian progressive rock legends RUSH says that he would love to see one of the band's records turned into a musical.

"I've always thought that RUSH's music really lent itself to theatrical reproduction," he tells uDiscover Music (see video below). Especially the concept albums such as '2112' or, more recently, 'Clockwork Angels', I think, would be fantastic opportunities to orchestrate the music a little bit more, get into a whole different kind of presentation. But visually, they're quite striking. The stories have a lot of potential in terms of staging and imaginative scenery. I think they really are tailor-made for that. So I'd love to see that happen sometime."

Last year, Lee admitted that he "barely" made sense of RUSH's concept LPs, the lyrics to which were written by drummer Neil Peart. "I grew up listening to YES," he told The Guardian. "I still can't tell you what any of those records are about, honestly. I don't think it matters, because the music and the lyrics create a sound, and that gives you a picture of a meaning. Sometimes that's enough to make you love it."

RUSH has been completely inactive since completing the "R40 Live" tour four years ago. Drummer Neil Peart was battling enormous physical pain through much of the trek, including a foot infection that made it agonizing for him to even walk.

A few years ago, guitarist Alex Lifeson told Rolling Stone that he receives injections for psoriatic arthritis. He was previously hospitalized for anemia from bleeding ulcers and suffered breathing problems.

Lifeson and Lee have repeatedly said that RUSH will never do a show unless all three musicians agree to take part. They haven't performed as RUSH without Peart since he joined the band in 1974.