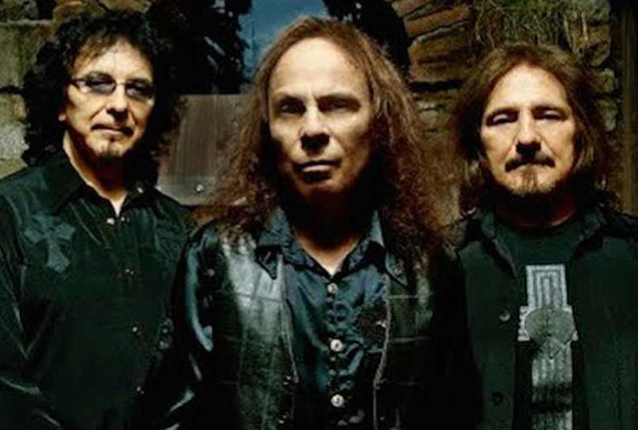 Geezer Butler has confirmed that he is featured on a previously unreleased Ronnie James Dio-era BLACK SABBATH song titled "Slapback" which was uploaded to YouTube several days ago.

Gary Rees, the stepson and executor of the estate of SABBATH's longtime keyboardist Geoff Nicholls, shared the track last Friday (March 5), writing in an accompanying message that he had found it on a cassette tape that contained other material recorded during SABBATH's 1979 songwriting sessions for the following year's album "Heaven And Hell".

Asked in an interview with SiriusXM's "Trunk Nation With Eddie Trunk" on Monday (March 8) if he knew anything about this purportedly unreleased tune, Butler said: "Yeah, that was one of the songs that we did before I left," referring to the fact that he exited SABBATH for a short time during the "Heaven And Hell" sessions while he was dealing with some personal issues. "It's probably the reason I did leave. [Laughs] It was just one of those songs that didn't make the grade."

Asked if he in fact played bass on the recording that was uploaded to YouTube, Butler said: "Yeah, that was right before I left. It was just a one-off thing. We just jammed it and didn't think anything more of it. It didn't really work."

The "Slapback" upload came a month and a half after Rees shared a previously unreleased rehearsal recording of BLACK SABBATH playing the "Heaven And Hell" title track during the same sessions. That recording featured Nicholls on bass due to Butler's absence during the initial writing stage for the LP.

Butler went on to say that it's "incredible" to see both these recordings see the light of day more than 40 years later. "And it's quite good quality as well," he said. "I've heard the two songs from the Geoff Nicholls thing. It's reasonable quality."

Dio joined SABBATH for the first time in 1979 and quickly found kindred spirits in Butler, guitarist Tony Iommi and drummer Bill Ward. When "Heaven And Hell" was released in April 1980, the album was met with effusive reviews for the band's return to form on metal masterpieces like "Neon Knights" and the title track. The LP reached No. 9 in the U.K. and No. 28 in the U.S., where it was also certified platinum.

Released on March 5, "Heaven And Hell: Deluxe Edition" added several bonus tracks that have never been made available in North America, including versions of "Children Of The Sea" and "Die Young" recorded live in 1980 in Hartford, Connecticut. The set concludes with live rarities like "E5150" and "Neon Knights" that originally appeared in 2007 on the Rhino Handmade's limited edition collection "Black Sabbath: Live At Hammersmith Odeon".

In a recent interview with Songfacts, Iommi was asked how the songwriting compared to when Dio was the singer in SABBATH as opposed to Ozzy Osbourne. He responded: "It was different. With Ozz, we tend to jam usually, and then Ozzy would sometimes be in the room, sometimes he wouldn't. And sometimes he'd hear something and go, 'Oh yeah,' and start singing something to it. It depends on what periods. We'd play and come up with a format for a song, and then he'd listen to it and start coming up with a melody. With Dio, he was a little bit more involved because he played an instrument [bass] and was more musical. And that's not knocking Ozzy, because Ozzy was great at what he did, but Dio was a little more involved. I could sit down quietly and play something to Ronnie, and he'd say, 'Yeah, I like that.' He'd start singing, and then go, 'Can I go through a change now? What about that note there? Oh yeah, that's good.' We'd work together and bounce back with each other."

Nicholls died in January 2017 after a long battle with lung cancer.

Geoff, who played keyboards on all of SABBATH's albums between 1980 and 1995 and toured with them, was reportedly in remission from cancer at the time of his death but succumbed to the side effects of chemotherapy.

Nicholls's first appearance on a SABBATH album was on "Heaven And Hell". Although his main role with SABBATH was on the keyboard, Nicholls also played some rhythm guitar at concerts. In addition to not always being credited as a full member of the band, Nicholls rarely appeared on stage during SABBATH shows and would instead play on the side of the stage or backstage.

Nicholls's involvement with the band ended when Adam Wakeman (a member of Ozzy Osbourne's solo band) was chosen to play keyboards during SABBATH's 2004 and 2005 tours as part of Ozzfest.