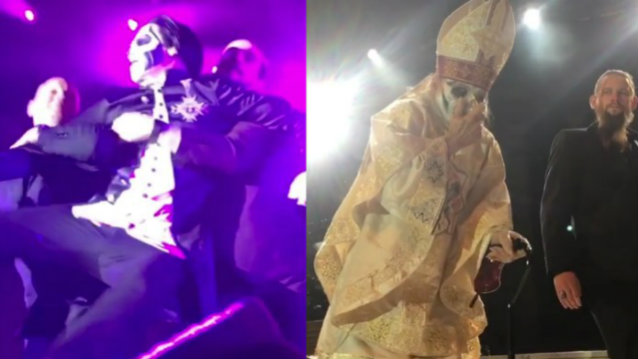 Swedish-based occult outfit GHOST wrapped the tour cycle for 2015's "Meliora" album and last year's "Popestar" EP with a concert Saturday night (September 30) in Gothenburg that ended dramatically with singer Papa Emeritus III getting forcibly removed from the stage by two men. A short time later, an elderly person wearing Papa-like attire of a robe and a tall pointed miter headdress, his face covered in black-and-white corpse paint, took the stage and addressed the crowd in Italian. He reportedly said (see video below): "I am Papa Emeritus Zero. The party is over and now a new era begins. The Middle Ages begin now."

Papa Emeritus is played by GHOST lead singer and founder Tobias Forge, who, in a parody of the Catholic Church's tradition of papal succession, is purportedly replaced by a new Papa for each GHOST album.

Every Papa, as it happens, has a voice and build exactly like his predecessors.

He told Metal Wani earlier in the year that the disc would be "darker" than "Meliora", "because it's thematically set in a darker setting. 'Meliora' was supposed to reflect some sort of utopia/dystopia in the modern society, whereas this new one is gonna be a little bit more apocalyptic, a little bit more back to the medieval times, which, obviously, is associated with darkness. "

He continued: "Obviously, in metal, in extreme metal, you have a myriad of records that are thematically in the Middle Ages, but the idea for this new album is to combine… So where [other] records [covering similar lyrical themes are] drowned and surrounded and drenched in death, it's gonna be a record about survival. So that constantly working with those polar, sort of, elements is also a difference, I guess, between… If you find a black metal record that is about the Plague and the death, you will have only death — everything is just black and everything just ends black. Whereas one of my driving forces writing a record like that is to write a record about the survival of that and the prosperity."

Forge recently revealed his identity while responding to a lawsuit filed by four former members of GHOST, who accused him of cheating them out of their rightful share of the profits from the group's album releases and world tours.

In his court documents, Forge — who had previously played in several other rock bands, including REPUGNANT, CRASHDIET, SUBVISION, MAGNA CARTA CARTEL and SUPERIOR — took credit for developing GHOST's image and stage show and blamed his ex-bandmates for "destroying the mystery" surrounding the group by lifting the lid on GHOST's business dealings.