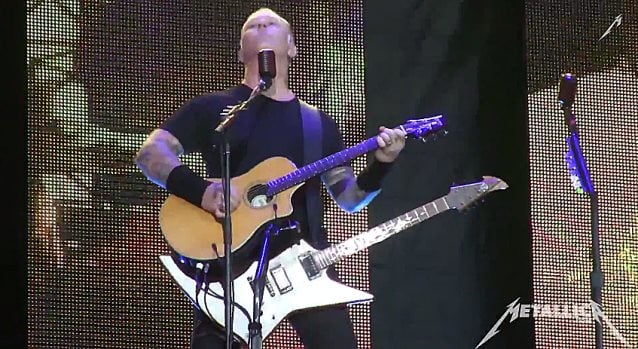 Glastonbury festival's founder and organizer Michael Eavis has defended his decision to book METALLICA as one of the headliners of this year's event, claiming that no other band has been as "keen" to play the festival as the San Francisco-based heavy metal giants.

METALLICA is the first metal act to headline Glastonbury in its 44-year history.

"We have been going for so long that people don't expect us to put on a heavy metal band," Eavis said, reports Sky News.

"We had RAGE AGAINST THE MACHINE and we have had lots of fairly heavy metal bands in the past but this is not a typical headline.

"We usually have bands like RADIOHEAD, COLDPLAY and U2, THE ROLLING STONES, but I am really looking forward to them.

"There's no other band in the whole history of the festival that has been so keen to play. They will do the best set of their lives here."

Eavis also briefly touched upon the petition that was launched online last month calling for the removal of METALLICA as Glastonbury headliners after it was announced that frontman James Hetfield was hosting a new series about bear hunting on the History channel. Eavis explained Hetfield "said they were only killing bears that were dangerous to life."

He added: "I don't know the truth behind that whole saga."

According to The Pulse Of Radio, Glastonbury is a very laid-back type of festival, with more of a hippie/indie vibe than most, which is why there has been so much controversy over METALLICA playing the show in the first place.

The quartet will headline the event on Saturday, June 28, with ARCADE FIRE in the slot the previous night (June 27) and KASABIAN starring on June 29.