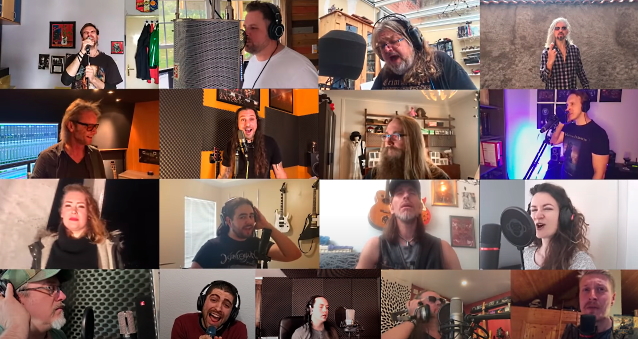 Over 50 rock and metal musicians, including members of GRIM REAPER, FIREWIND, CYHRA and MASTERPLAN, have joined forces to record an epic metal cover of "We Are The World" while in quarantine. The project is the brainchild of Norwegian musician Marius Danielsen of the band DARKEST SINS.

The original version of the star-studded charity single was recorded in 1984 by Michael Jackson, Lionel Richie, and a supergroup of other stars to aid African relief. The song, which sold millions of copies and raised more than $75 million, celebrated its 35th anniversary in mid-March.

"We Are the World" reached No. 1 on the Billboard Hot 100 and spent five weeks at the top of the chart.

Awarded numerous honors — including three Grammy Awards, one American Music Award and a People's Choice Award — the song was promoted with a critically received music video, a VHS, a special edition magazine, a simulcast, and several books, posters, and shirts.

Following the devastation caused by earthquake in Haiti in 2010, a remake of the song by another all-star cast of singers was recorded on February 1, 2010. Titled "We Are The World 25 For Haiti", it was released as a single on February 12, 2010, and proceeds from the record aided survivors in the impoverished country.

Danielsen's version of "We Are The World" features the following musicians: