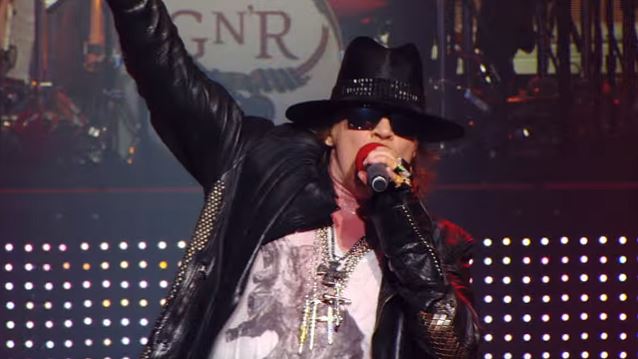 THE CULT guitarist Billy Duffy has revealed to Vanyaland that his band will share the stage with the reunited GUNS N' ROSES in the coming months. And while Duffy didn't elaborate, he did say the dates wouldn't be taking place in the U.S.

"I believe we will be playing with them at a couple of shows that are not in the United States. I think I can say that, I believe," Duffy said. "I just found out."

GUNS N' ROSES is rumored to be playing an intimate warm-up show on Friday (April 1) at the Troubadour, one of the Los Angeles clubs where the band first played before the release of its debut album, 1987's "Appetite For Destruction". More information is expected by Friday morning, at which point a limited number of tickets will go on sale to the general public.

With the first GUNS N' ROSES reunion show scheduled for just over a week from now, on April 8 in Las Vegas, the band has still not officially announced the lineup of musicians who will take the stage beyond singer Axl Rose, guitarist Slash and bassist Duff McKagan. But a new photo posted at the group's official Twitter account has sent fans into a frenzy. The picture of Ahead brand drumsticks fueled speculation that original drummer Steven Adler was returning to the group, especially after past and present GUNS drummers Matt Sorum and Frank Ferrer both denied they used the sticks.

According to The Pulse Of Radio, fans first approached Sorum on Twitter, with the one-time GUNS drummer confirming that he used Ahead sticks from 1991 to 1993 but did not currently use them.

Ferrer also responded to the image, saying the Ahead ones weren't his and that he used Vater sticks.

That left Adler, who has remained silent about the GUNS reunion since it was announced and also did not comment on the photo of the sticks. Adler, like Sorum, has used Ahead sticks in the past but not recently.

Recent reports have suggested that Ferrer, who has been in the GUNS lineup since 2006, will play the bulk of the show at the band's upcoming dates, although Adler could appear as a special guest.

GUNS N' ROSES has six shows scheduled in April: two in Las Vegas, two in Mexico City and two at the Coachella Music And Arts Festival in Indio, California. The band has also announced the cities for a 21-show North American tour, although dates and venues have yet to be confirmed.