"We are so excited to announce our fall tour," says HALESTORM's Lzzy Hale. "'Halestorm's Halloween Scream' will be a night for all the Freaks with our friends STARSET and NEW YEARS DAY plus special surprises and collaborations for your entertainment! We can't wait to see you all!"

A special BLABBERMOUTH.NET presale will begin on Wednesday, June 21 at 10:00 a.m. local time and end on Thursday, June 22 at 10:00 p.m. local time. When prompted, type in the presale code "SCREAM" to access tickets before the general public.

HALESTORM is collaborating with Nick Raskulinecz on material for the band's fourth album. At least some of the sessions are taking place at the Dark Horse Recording studios just outside Nashville.

Raskulinecz is an acclaimed producer who has previously worked with RUSH, KORN, ALICE IN CHAINS and DEFTONES, in addition to having helmed HALESTORM's third covers EP, "ReAniMate 3.0: The CoVeRs eP", which came out in January.

Lzzy recently told the 97.7 WQLZ radio station that HALESTORM was "about half way" through the production process for the band's next album. She said: "We have a lot of tracks. We've been kind of doing both [recording and working on pre-production]. We've been writing in my personal studio, at my house, and then we've been going into an actual studio with a producer and doing kind of pre-pro as we go along, which we've never really done. 'Cause usually, it's, like, 'Okay, we have all the songs together, and then we'll go in the studio.' And this time we have like half-songs and then we go in the studio and we finish them. We have some keeper song takes and there's maybe some vocal or guitar takes that we won't redo later, but, yeah, it's everything all at once at the same time, so we're multitasking." 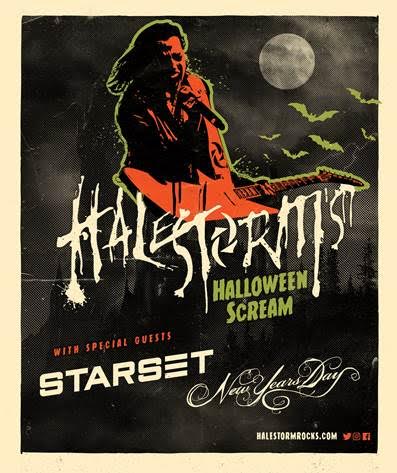