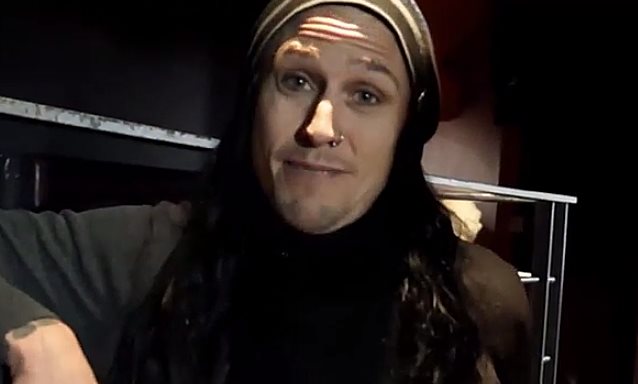 Neuweltmusic conducted an interview with vocalist Joakim "Jocke" Berg of Swedish sleaze rockers HARDCORE SUPERSTAR before the band's November 29 concert in Dublin, Ireland as the support act for BUCKCHERRY. You can now watch the chat below.

HARDCORE SUPERSTAR's latest album, "C'mon Take On Me", was released in Europe on March 1 via Nuclear Blast Records. The follow-up to 2010's "Split Your Lip" was produced by the bandmembers themselves and mixed by Randy Staub (METALLICA, MÖTLEY CRÜE, THE CULT).

"C'mon Take On Me" was made available as a CD in slipcase, as a digital download, on black vinyl and on strictly limited pink vinyl (only available at the Nuclear Blast mailorder).

Commented HARDCORE SUPERSTAR drummer Magnus "Adde" Andreasson: "We came up with the idea [for the 'C'mon Take On Me' cover] during the recordings of the album. It's just so sexy when a woman jumps into a drum kit — what could be more exciting? We discussed the concept with photographer Micke Johansson, who loved the idea. What we especially like about it is the combination of sex and bruises!"

"Because Of You" video: