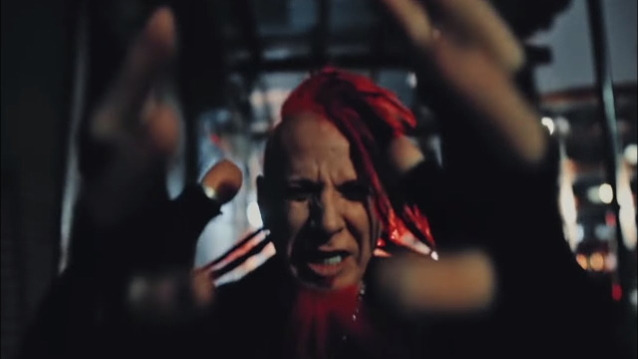 Christian Brady says that HELLYEAH is "not dead" despite widespread speculation to the contrary.

HELLYEAH has been inactive since early 2020 when its U.S. tour was canceled in the wake of the COVID-19 pandemic. In the meantime, HELLYEAH singer Chad Gray has reunited with his previous band MUDVAYNE, which has just played its first two shows in 12 years, with plans to continue touring in 2022.

A few months before the pandemic hit, HELLYEAH had completed a couple of U.S. tours in honor of its drummer, Vinnie Paul Abbott, who passed away in June 2018 at the age of 54 in his sleep at his home in Las Vegas. The official cause of death was dilated cardiomyopathy, an enlarged heart, as well as severe coronary artery disease.

Vinnie recorded a total of six albums with HELLYEAH over a decade, including its latest, "Welcome Home", for which he laid down his drum tracks before his passing.

During an appearance on a video podcast hosted by Todd Kerns, the bassist of SLASH FEATURING MYLES KENNEDY AND THE CONSPIRATORS, Brady said that no long-term plans for HELLYEAH have yet been made as the band continues to be in a holding pattern.

"Chad's doing MUDVAYNE," the guitarist said (as transcribed by BLABBERMOUTH.NET). "I'm assuming that'll keep him probably busy for a minute, at least through the next year, doing touring stuff. I don't know what their plans are as far as if they're gonna do an album or anything like that; I don't know. Chad actually lives here in Vegas now; he moved out here recently. We talk often, but we just don't necessarily talk [about his plans for MUDVAYNE]. But we do talk HELLYEAH sometimes, and we're all in contact. And Tom's [Maxwell, HELLYEAH guitarist] actually been writing a bunch, man. He sent some ideas out and they're really cool. It's kind of sparking that in me again, and [in] Chad. So we're talking about doing some writing. I don't know yet what it'll turn into, but I know that we're not done. None of us have said, 'Yeah, HELLYEAH's done.' A lot of people probably assume that — 'Yeah, Chad's back with MUDVAYNE. HELLYEAH's done' — but we've never said that to each other or publicly at all. HELLYEAH's not done. We're just not sure what HELLYEAH's going to be moving forward.

"Right now, we have no label. We have no management," Brady revealed. "We cleaned house. We're free and clear. It's actually very exciting, because now we hold all the cards; we're in control. So we can write whatever we want. We can release a couple of songs at a time. If there's a demand for us to tour and it financially makes sense, then I'm sure at some point we'll find a way to do that."

Reflecting on how "Welcome Home" turned out and the way it was received by the HELLYEAH fans, Christian, who joined the band in 2014, said: "I'm proud of that record, and I know [Vinnie Paul] would have been really proud of that record. And I feel like it didn't get quite the push from certain parties that it should have. We had one single off of it — it was [the] 'Welcome Home' [title track] — and it ended up at No. 4 at rock radio; it did really well. And then, for whatever reason, a second single never got put out. And then COVID hit. We did those two 'Celebration Of Life' tours in 2019, and we were supposed to do another run in April-May in 2020, and that obviously got canceled. And so that was kind of it. But even the tours we did, we didn't know what was gonna happen after that. We just were, like, 'We need to go do this to celebrate our boy.' And that's what it was meant to be. It was never, like, 'We're back and we're doing this.' It was, 'We're gonna go tour and we're gonna do a celebration of life for our boy. And then we're gonna have to figure things out from there.'"

STONE SOUR drummer Roy Mayorga stepped in as Vinnie Paul's replacement for the touring activity in support of "Welcome Home", which came out in September 2019.

In September 2020, Maxwell told "The Ex-Man" podcast that he wasn't sure there would be a follow-up album to "Welcome Home".

"When [Vinnie Paul] died — I'm not gonna lie — my passion, my love affair died as well with him," Tom said. "I don't even know if I wanna make another HELLYEAH record without him.

Mayorga's addition to HELLYEAH was made official in May 2019. At the time, the band said Roy was the perfect guy to take Vinnie Paul's place. "These men had so much love and mutual respect for each other, this makes our transition so much easier," HELLYEAH said in a statement.