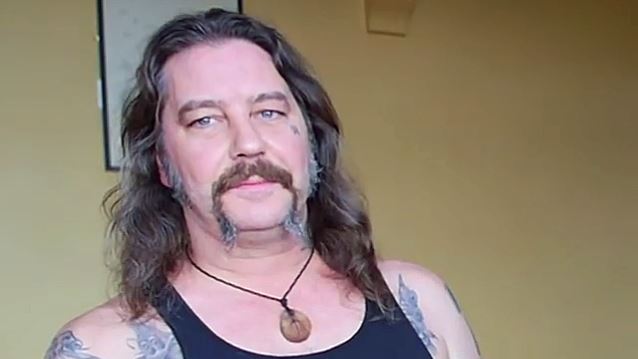 Christina Rowatt of Australia's The Void recently conducted an interview with Matt Pike of HIGH ON FIRE and SLEEP. The two-part chat, which features footage of SLEEP and HIGH ON FIRE at the Manning Bar in Sydney, can be seen below. This interview is also featured on the brand new "Riffing With Christina" podcast, which can be heard on iTunes.

Speaking about the early days of thrash metal in the 1980s, Pike said: "The difference between glam rock, [which is] what was going on then, and then what the thrash metal guys [who] were coming into that L.A. scene, in that Bay Area scene, and there's this competing force, 'cause it's still metal, but some are longhairs and some are just not wearing lipstick and they're concentrating on their riffs. That's where TESTAMENT came from, POSSESSED, DARK ANGEL, you know, SLAYER, METALLICA, ANTHRAX — all that kind of stuff was coming from their integrity of them not having anything."

Pike was also full of praise for MEGADETH mainman Dave Mustaine, whom he called "a fucking innovative guy for that era." He added: "I don't think METALLICA would sound like METALLICA without Dave Mustaine. I don't think a lot of people would be doing jugga-juggas if Dave Mustaine hadn't set that METALLICA thing up. I can tell by his playing. I know the songs that Dave fucking wrote in that band, and then you see him and what he does now… And, you know, there's certain albums that I like better than others, but probably because I was a kid when 'So Far, So Good... So What!' came along. And then nowadays, when I hear it, I'm an older man… It's still great, but it's not the one that I had the lust over when I was a metal kid."

HIGH ON FIRE's latest album, "Luminiferous", was released in June 2015 via eOne Music. The CD was recorded at Salem, Massachusetts' GodCity Studios with producer Kurt Ballou. It was the follow-up to the group's 2012 release, "De Vermis Mysteriis", an album hailed as "not for the faint of heart" by The New Yorker and "a fantastically constructed bloodbath" by Entertainment Weekly.