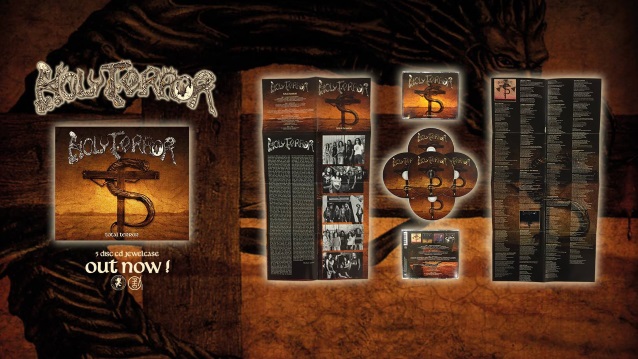 MetalReview.com called the band "faster than SLAYER, heavier than EXODUS, and more melodic than MEGADETH." On review of the band's debut, "Terror And Submission", the web site noted, "this is the coolest, most deliberate guitar-driven thrash metal album there is."

Formed by guitarist Kurt Colfelt (a.k.a. Kurt Kilfelt after his departure from AGENT STEEL, HOLY TERROR found an immediate audience as American thrash began to take its turn onto the global stage. Alongside Colfelt, the band included guitarist Mike Alvord, bassist Floyd Flanary, drummer Joe Mitchell, and vocalist Keith Deen. The band would disband after only two recording. A short-lived period of activity in 2006 resulted in additional material from the band; the reformation excluded Deen. Deen died after a battle with cancer on December 13, 2012.

"Total Terror" is the first of many planned box sets via Dissonance Productions in 2018.

Dissonance Productions is distributed in North America via Abstract Sounds Distribution/The Orchard and via Plastic Head Music for the rest of the world.