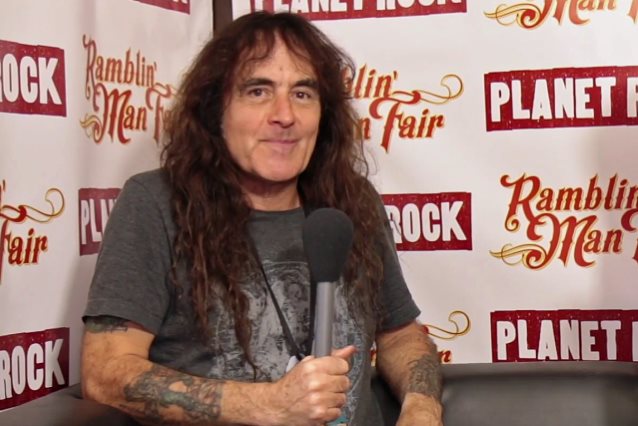 Planet Rock's Paul Anthony conducted an interview with IRON MAIDEN and BRITISH LION bassist Steve Harris earlier today (Saturday, July 29) at the Ramblin' Man Fair, which is being held at Mote Park in Maidstone, Kent, United Kingdom. You can now watch the chat below.

Asked about the status of the previously announced BRITISH LION live album, Harris said: "It all got put on the backburner for a little while, unfortunately, because… Well, it's not 'unfortunately,' [but] the dayjob comes first, so something else cropped up with MAIDEN [that] needed to be done. So I did all that. It is what it is. So it's just been put back a bit later. But I will get around to doing it, but it's just not… [I'm not] doing it when I thought I was gonna be doing it. So, yeah, it'll still happen. And straight after this tour, we're going in to do some backing tracks for the next [BRITISH LION] album as well — studio album — so at least we'll get some of that done. And we'll just get it done bit by bit. I've just gotta try to cram things in, really."

Harris told Mammoth Metal TV last year that the sophomore BRITISH LION disc would sound slightly different from the band's 2012 self-titled debut. "The band has been evolving anyway, just live naturally," he explained. "The second album will be a lot more like we are now. It's just the vibe, the sounds, the guitar stuff, some of Graham's [Leslie] guitar sounds on a couple of songs were that sort of sound. I'd still like to keep that element in there because the band is evolving. It's what we started with, so it's important."

He added: "[Of the new BRITISH LION songs] I think 'Bible Black' in particular, is pretty heavy, even though it has very melodic verses. I don't think there's too many bands out there at the moment playing this kind of stuff that is heavy and with this much melody in it. Maybe there is, but I don't know about it. We've played on some festival-type bills and we've been very different as to who else is on the bill, which I think is quite interesting."

"British Lion" was released in the U.S. on September 25, 2012 via Universal Music Enterprises (UMe). Mixed by Kevin Shirley — whose credits include IRON MAIDEN as well as LED ZEPPELIN, JOURNEY and RUSH, among many others — the CD featured Harris alongside singer Richard Taylor, guitarists Graham Leslie and David Hawkins and drummer Simon Dawson.