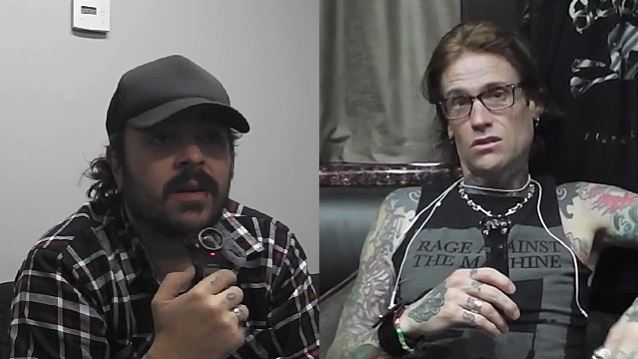 Simmons told Esquire magazine earlier in the month — in an interview conducted by his son Nick — that "rock did not die of old age. It was murdered. Some brilliance, somewhere, was going to be expressed and now it won't because it's that much harder to earn a living playing and writing songs. No one will pay you to do it."

Simmons went on to elaborate that as a result of file-sharing and other issues, record label support for rock music was not available like it was when KISS was coming up, concluding, "It's finally dead. Rock is finally dead."

AlternativeNation.net had the chance to sit down with members of SEETHER, BUCKCHERRY and ESCAPE THE FATE at the Rockstar Energy Drink Uproar tour stop in Irvine, California on September 16. While the musicians agreed with points Simmons made, they had much more hope for rock than the KISS legend does.

Said Morgan: "I agree that there aren't a lot of good rock bands coming out. I think it's become homogenized and I think that there's too much focus on what people look like and not much on what they sound like. But then again, by the same token, I don't take Gene Simmons as an authority on anything, because the dude's out of touch, man. To come from a guy like that, I guess it's something that's worth listening to, but he also doesn't live in the real rock world like the rest of us; he lives in 'Gene Simmons land.' And KISS' planet is very different to the rest of ours, you know what I mean? He doesn't get on a tour bus and ride around for a year at a time; he flies around, and has flowers and crap put in his dressing room and stuff. So I do agree that there aren't a lot of bands that are inspiring to me, and there aren't a lot of bands that I'm gonna go out and buy their albums. But there are other bands — like there's a band called KYNG that I'm a huge fan of. And those guys are just plugging away by themselves, man, and every single band that they've toured with loves them, and people are starting to come around to them. And that's just because those guys are hard workers and they write good music. So there is still good music out there. It's just that record companies don't have the imagination to find it, I don't think."

Stated Todd: "I read [Gene's] statement and I read some of the details of what he was saying, and some of it is true. And some of it is, like… I don't believe it. I think that if you're passionate about what you're doing and your band, then you're gonna find a way. All that statement means to me is there's a huge void in rock music for a great rock band. So that, to me, is really powerful, and it can be whatever you make it. And you've gotta go for it. What I think is really lacking in rock music are guitar heroes and really great frontmen that really work on their craft of singing and performing, and they're not sitting there playing a guitar, singng into a microphone, standing there being pretty stagnant the whole show. I think that we need more rock and roll heroes, guys that just shred on the guitar and they take their guitar very seriously, like Eddie Van Halen, like Slash, like all the guys… Angus Young, like those type of guys. Because there is a reason for rock and roll solos, there was a reason for it in rock music, and that's to give the singer a break, and also to add a really cool element to the music. So hopefully that's gonna happen again. Because I think a lot of the new rock records are very washed out, they're muddy, they lack melody, they lack groove, they lack songs. They have the same type of models. Like, if you listen to Active Rock radio, it's, like, one band after another and you can't tell who is who, and you can't tell what record a song came off of out of, like, three or four records of one band. You're, like, 'Was that record one or record three?' Not to name names, because I know everybody is out there working hard and being passionate about what they do, but I mean, that's just the way… that's what I feel like when I listen to it. Right now, all my new music is all pop. I just think pop is so interesting right now, 'cause there's so many great artists out there right now — like Bruno Mars, for instance. And stuff like that. That's exciting to me. I can't find anything… I have searched to find some really cool stuff in rock and I just can't find any super-great rock records. So I think there's a real good opportunity for a young band. They're gonna have to hustle and it's gonna be definitely harder than it used to be. But you've just gotta think of new creative ways to market your record."