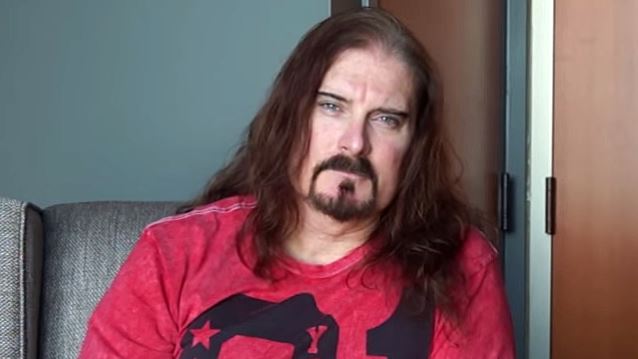 Vocalist James LaBrie of progressive metal giants DREAM THEATER will appear at the Midland Cultural Centre in Midland, Ontario, Canada on January 14. He will be interviewed by Fred Hacker as part of the ongoing "A Day In The Life" conversation series.

LaBrie recently sat down with Jenn for a pre-show interview. Check out the chat below.

Asked about DREAM THEATER's plans for the rest of 2015, LaBrie said: "DREAM THEATER will go back into the studio in New York in February and start writing and recording. Usually, that's about a five-month period of doing that. Monday to Friday; we take our weekends off. And then, hopefully, there will be a late fall release. And we don't wanna start touring until 2016 to support that. So we'll engage and start on another world tour probably right around this time next year."

James also spoke about his plans for his solo career and whether there is any new music in the works. "I had done that in the past," the singer said. "At this point, we're not locking in any time soon to start writing or anything like that, but that can always change within a month or two. We will see how we feel. I don't want to have the next James LaBrie album come out until it will coordinate itself so that DREAM THEATER's tour is starting to wind down. The album comes out and sets that up. And I'd like to do a fairly extensive tour with the solo band, 'cause we haven't done a tour with that since 2005. So it's well overdue."

LaBrie's latest solo album, "Impermanent Resonance", sold around 2,200 copies in the United States in its first week of release to land at position No. 198 on The Billboard 200 chart. The CD was released on August 6, 2013 in North America and July 29, 2013 in Europe via InsideOut Music. In addition to the standard CD and the digital download format, the effort was made available in Europe as a limited-edition digipak featuring alternate artwork and two bonus tracks ("Unraveling" and "Why"), as well as on limited LP version (with the full album as bonus CD).

DREAM THEATER's latest, self-titled sold around 34,000 copies in the United States in its first week of release to debut at position No. 7 on The Billboard 200 chart. The CD, which arrived in stores on September 24, 2013 via Roadrunner, earned DREAM THEATER its second Grammy nomination, for "Best Metal Performance" for the single "The Enemy Inside".