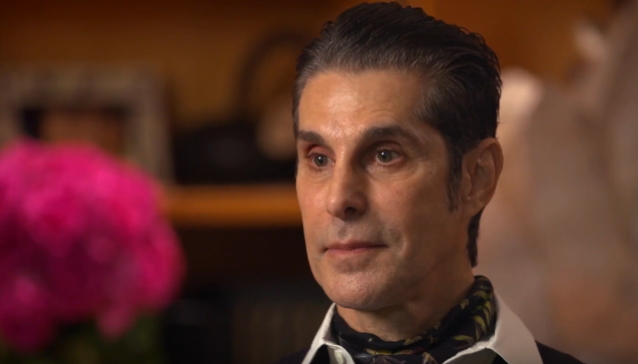 AXS TV presents four all-new episodes of the popular celebrity profile "The Big Interview With Dan Rather" during the month of January, as the series returns on Wednesday, January 6 at 8 p.m ET/5 p.m. PT. Each episode was filmed remotely due to the pandemic, utilizing both Zoom and in-person camera teams, and puts the spotlight on candid conversations with entertainment icons and influencers as they open up about their legendary lives and acclaimed careers. After these initial four episodes are broadcast, more all-new episodes of "The Big Interview" will air in early spring.

In the clip below, Farrell talks about how the pandemic is a time for revolutionary thought and progress.

"The Big Interview With Dan Rather" airs every Wednesday at 8 p.m ET/5 p.m. PT, only on AXS TV.

"We've got so much JANE'S material in the can," he explained. "We'll be releasing a couple of tracks, maybe writing some new ones. Not this year, 'cause we're getting late in the year. But I can tell you in the next month or so I'm gonna be finishing up a couple of JANE'S ADDICTION tracks."

In the same interview, Farrell revealed that he had his voice box removed during a recent operation on his vertebrae. The vocalist underwent successful surgery for "crushed discs in his neck," a condition caused "mostly from partying and leaning back my head to rip out notes, and surfing and dancing around," he said.

"They had to remove my voice box and put it on a table," Farrell explained. "That was daunting. They literally exposed my skeleton, took the discs out and put in artificial discs. So now I am a quarter inch taller and twice as attractive to my wife."

This past August, JANE'S ADDICTION played two songs during Lollapalooza's Lolla2020 livestream, a free four-night broadcast event which took place on the original dates of the Chicago-based festival. Farrell, guitarist Dave Navarro, drummer Stephen Perkins and bassist Chris Chaney reunited for their first public appearance in three years to perform "I Would For You" and "Stop!"

Formed in 1985 in Los Angeles, JANE'S ADDICTION has been firmly embedded in the collective pop culture consciousness for 35 years now. Farrell stands out as one of music's most forward-thinking and enigmatic frontmen. Navarro remains a veritable guitar god. Perkins's tribal stomp has also influenced a generation of percussionists. The hugely influential band has sold in excess of seven million records in the U.S. alone. When Farrell created the traveling Lollapalooza festival, it galvanized the alternative rock movement and brought it to a whole new level.

JANE'S ADDICTION released its last album, "The Great Escape Artist", back in 2011.

"The Great Escape Artist" sold around 24,000 copies in the United States in its first week of release to land at position No. 12 on The Billboard 200 chart.

"The Great Escape Artist" was JANE'S ADDICTION's first all-new studio effort since 2003's "Strays", which opened with more than 110,000 units to enter the chart at No. 4.

"The Great Escape Artist" was only JANE'S ADDICTION's fourth album of original material in 20 years.

Although founding bassist Eric Avery initially returned to the band when it reactivated in 2009, he quit the following year.

Dave Sitek of TV ON THE RADIO played bass on and co-produced "The Great Escape Artist", while Chaney has returned as touring bassist.