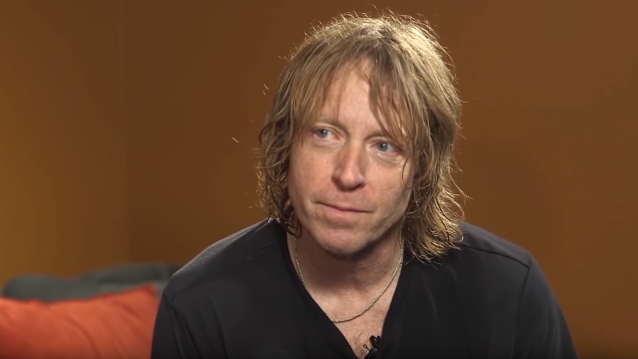 Pilson is currently tracking the disc at his home studio in California, where he recorded a video alongside Starr that officially confirmed the project's existence. "We are here doing a project — which we cannot tell you the name of yet, or we'd have to kill you — featuring Reb Beach on guitar, Robin McAuley on vocals, Matt Starr on drums [and] yours truly on bass," he said. "It's going to be coming out probably in late 2019. It's turning out amazing. Matt is laying his drums down right now. He's bringing it to life. It's amazing, this project — incredible music. Wait until you hear everybody's playing and singing. It's beyond — way beyond."

A subsequent post on the Frontiers Twitter account says that the demos are "incredible," and that the in-progress album "is even more awesome than it sounds."

Pilson recently told Peter Harris of the "10?" podcast that he was working with Beach and McAuley. "I just did a project with Reb Beach and Robin McAuley on vocals," he said. "There's a song on the record that I wrote right after seeing the QUEEN movie ['Bohemian Rhapsody']. I came home and I sat down at the grand piano and pretty much wrote exactly the chorus that we have, just coming straight [from] the movie. It is a bit QUEEN-like."

Beach — who was among the artists recently interviewed for Guitar World's February cover story on the "last days of hair metal" — is an original member of WINGER. He joined WHITESNAKE in 2002. Notably, he also performed on one DOKKEN album alongside Pilson, 1999's "Erase The Slate".

Irish vocalist McAuley is best-known for fronting MCAULEY SCHENKER GROUP from 1986 to 1993. Alongside Graham Bonnet and Gary Barden, he has toured with MICHAEL SCHENKER FEST in recent years and also appears on "Resurrection", the group's 2018 album.

Starr — who joined Ace Frehley's band in 2012 and continues to perform with him periodically — began touring with MR. BIG in 2014 and appears on the group's latest album, 2017's "Defying Gravity". He has also toured and/or recorded with HOOKERS & BLOW, BEAUTIFUL CREATURES and BURNING RAIN, among others.

. @JeffPilson @RealRebBeach @robin_mcauley & @MattStarrMusic are recording an album and YES, it is even more awesome than it sounds. The demos are INCREDIBLE. Get ready... pic.twitter.com/zqNmOe7DVr

. @JeffPilson @RealRebBeach @robin_mcauley & @MattStarrMusic are recording an album and YES, it is even more awesome than it sounds. The demos are INCREDIBLE. Get ready... pic.twitter.com/zqNmOe7DVr