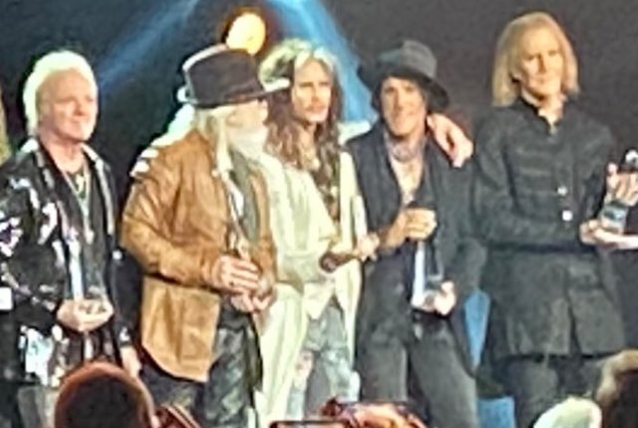 Joey Kramer joined his AEROSMITH bandmates as they accepted the 2020 MusiCares Person Of The Year award last night (Friday, January 24) at the Los Angeles Convention Center.

After entertainment lawyer Dina LaPolt introduced the group as the night's honoree ("They are brothers. They refer to each other as brothers and they even fight like brothers," she said), all five members took the stage, but only Kramer and singer Steven Tyler spoke.

Tyler told the audience: "Remember, people only really get interesting when they start to rattle the bars on their cages. And the best way to make your dreams come true is to wake up." Kramer then thanked MusiCares, fans, his wife and the music industry before exiting the stage.

Tyler, Joe Perry, Tom Hamilton and Brad Whitford then brought out Kramer's drum tech, John Douglas, for performances of "Big Ten Inch", "Dream On" and "Sweet Emotion", after which they were joined by Johnny Depp and Alice Cooper.

MusiCares provides financial, medical and personal assistance to musicians in need. Since being launched in 1989, MusiCares has distributed more than $60 million to music industry members in need.

The MusiCares gala took place two days after a Massachusetts judge ruled against Kramer in his bid to perform with AEROSMITH at two Grammy-related events this weekend.

After Kramer injured his shoulder last year, his drum tech filled in for a few gigs during AEROSMITH's residency in Las Vegas. Kramer did, however, perform with the rest of AEROSMITH in July at the Twin Cities Summer Jam in Shakopee.

When Kramer arrived at a rehearsal studio in Los Angeles earlier this week to play with his AEROSMITH bandmates, he was met with two apologetic security guards, who informed him that the other four members of the group hired them to keep him from entering the venue.


#joeykramer speaks at #musicares with #aerosmith. He was the only one besides #steventyler who gave a speech.

#JohnnyDepp honoring Aerosmith at MusiCares Person of the Year on January 24, 2020 in Los Angeles, California.
Credit to @muiricane pic.twitter.com/7ggCUaU6yZ