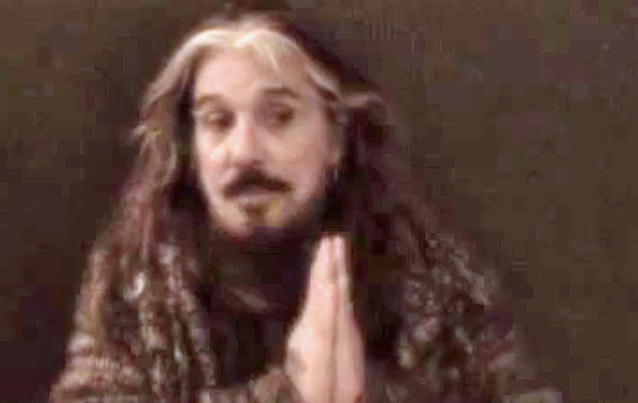 Radio host Jim Chinnici recently conducted an interview with John Corabi, former lead singer of MÖTLEY CRÜE, THE SCREAM and UNION. You can now watch the chat below.

Speaking about the fact that he was only credited for two songs on the original pressing of MÖTLEY CRÜE's 1997 album "Generation Swine" even though he claims he contributed to at least 80 percent of the material on the LP, Corabi said: "Honestly, that was kind of part of my whole lawsuit thing with those guys. [Editor's note: In July 1997, Corabi filed a $4-million lawsuit against MÖTLEY CRÜE for alleged breach of contract, fraud, and slander. Corabi claimed that he had not received royalties or credit for his work and contributions while he was in the band.]"

He continued: "Everybody knows it didn't end on a great note.

"There were some weird things.

"I was a little disappointed. And I don't care if anybody likes it or not. I thought we were, like… For five or six years, we were super tight; I hung out with those guys every day.

"I don't even know if they know. All I know is when they said they were bringing Vince back, I sat in their manager's office… Maybe the guys don't know… I doubt that anything gets by those guys without them knowing. But at the end of the day, I sat in the manager's office and he laid out what was gonna happen. And pretty much everything that he laid out didn't happen; it happened in a completely different manner. And I was just, like, 'You know what?! I love these guys, but I'm not a fucking doormat. So I did what I had to do. And that was one of the things that kind of bugged me. I felt there were some of my vocals on the record, and it was weird… But if you look at the record… I was, like, okay, I know how much guitar I played, I know how many songs I co-wrote, and I know my voice when I hear it. And I'm pretty sure there was a lot of my guitar parts, a lot of my vocals, and I felt like I didn't get as much credit as I should have for the songwriting as well."

Corabi added: "I didn't want it to be, but there was a little exchange — a verbal exchange — between my manager and their manager. And he called me and he told me what was said, and I just said, 'You know what?! Fuck that. I'm not anybody's doormat. And if this guy thinks that he can piss on me and walk away from it and I'll just lay there, it's not gonna happen.' So I kind of pushed back."

Corabi says that he understands why some people were unhappy with the fact that he had replaced Vince Neil in MÖTLEY CRÜE, but he wants fans to appreciate the fact that he did what anyone in his position would have done.

"People [tell] me, 'I didn't like it when you were singing in the band.' And I'm, like, 'That's fine.' I get that. I'm a huge AEROSMITH fan. If AEROSMITH decided to get a new singer — which they were considering doing a few years ago… I could not… I was, like, 'How can they fucking do that? That's bullshit.' And this light bulb went off, and I'm, like, 'Oh, I kind of lived this before.' I get it. Now I know why they were pissed. But I had nothing to do with it. So don't be an asshole to me. I wasn't the fucking chick that came in and made the husband leave his wife. You know what I mean?! That whole Vince and MÖTLEY thing happened days and weeks before I ever got the phone call. And I dare anybody to fucking do anything different than I did."

Corabi recently embarked on a tour during which he is celebrating the 20th anniversary of the MÖTLEY CRÜE album that he appeared on by performing most of the songs from the LP with his backing band.

Corabi originally joined CRÜE in 1992 as the replacement for the group's original singer, Vince Neil, who was fired due to personal differences. With Corabi on vocals, MÖTLEY CRÜE released one critically acclaimed full-length CD, which ended up being a commercial failure in the wake of grunge despite a Top-Ten placing on the album chart. When Neil returned to the fold in 1997, Corabi was left on his own and formed the band UNION with ex-KISS guitarist Bruce Kulick.