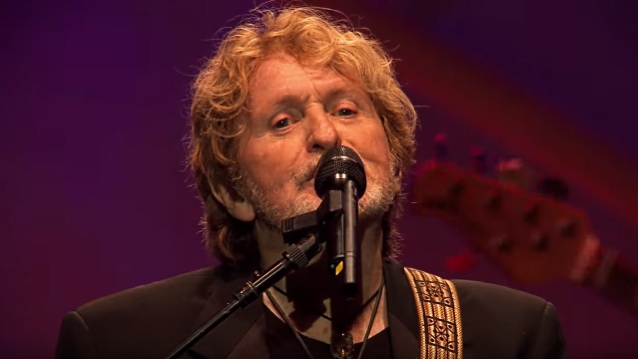 Jon Anderson says that he is "very open" to a YES reunion.

Anderson sang "Roundabout" and "Owner Of A Lonely Heart" with YES at the band's Rock And Roll Hall Of Fame induction two years ago, and his former bandmate Steve Howe makes a guest appearance on a song called "Now And Again" on Jon's upcoming solo album, "1000 Hands".

Asked by Rolling Stone whether he and Howe might they team up for some sort of reunion once his solo tour, "1000 Hands - Past Present Future", ends, Anderson replied: "I'm very open to it. It's been 50 years now. You think something has got to happen. To me, a great album has to be made. That's what I think. I don't know how it's going to be made, but the final YES event should happen."

He continued: "I've talked to a couple of people about it and they get it. I really want to do this. I've even written eight songs for the record that I'm thinking would work with a full orchestra and a choir."

Pressed about whether Steve Howe is also into the idea, Anderson replied: "I don't know. Maybe he'll read this article and say 'Yes' or 'No.' I don't know."

In the Rolling Stone interview, Anderson also confirmed that YES FEATURING JON ANDERSON, TREVOR RABIN, RICK WAKEMAN is on indefinite hiatus, explaining that the project with Trevor Rabin and Rick Wakeman enjoyed "a good couple of years" together. He added: "Onstage, we were just killing it every show. It was magic. But there was, dare I say it, mismanagement of the situation.

"I love the guys — we're musical brothers," he continued. "I just thought, 'I need to breathe.' I couldn't breathe towards the end. It felt like too much weight on me. Also, there was too much of, 'Should we do an album?' We couldn't agree on that. As soon as I said I didn't want to tour this year and just make my own album, I could finally breathe again."

You can watch the video for Anderson's new song "Ramalama" below.