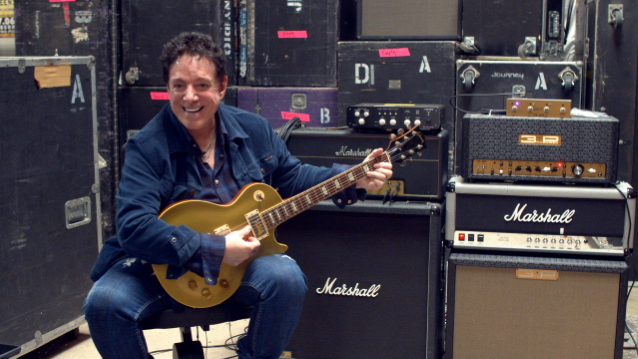 It has been nearly 50 years since Neal Schon, then not yet 20, co-founded the band that would come to be called JOURNEY. And almost 50 years later he knows that somewhere at this very moment, someone is singing at the top of their lungs a song he played on, sang on, probably co-wrote, too. A song that climbed the charts like King Kong atop the Empire State Building; a song that ruled radio like a benevolent monarch. A first-dance song. A first-kiss song. A lighters-in-the-sky song.

Merely mentioning the title of a JOURNEY song is enough to summon a half-forgotten remembrance that roars back like an old friend or a lost love. "Wheel In The Sky". "Lights". "Lovin', Touchin', Squeezin'". "Patiently". "Stone In Love". "Anyway You Want It". "Feeling That Way". "Open Arms". "Faithfully". "Who's Crying Now". "Separate Ways (Worlds Apart)". And, of course, "Don't Stop Believin'", the most downloaded song of the 20th century.

With that list alone, melody and memory rush back, collide, embrace. They're emotional shorthand, songs long used by filmmakers in need of easy triggers. Now imagine writing those works, recording them, performing them.

"To know that you can grasp the whole audience and hold them in your hand, to see everybody moving together? That is the universal language right there," Schon says now. "The people want and they desire. They need to be moved."

That has been his trade, his task, his life for five decades, ever since he made his recording debut as guitarist on SANTANA's acclaimed, influential third record in 1971. And to commemorate that landmark anniversary, along with JOURNEY's return to studio and stage, Schon is letting others have the opportunity to own the very instruments responsible for those memories.

On July 31, Heritage Auctions will offer 112 guitars from the extraordinary and expansive museum-quality Neal Schon Collection, among them two of the guitars that shaped JOURNEY's sound and the soundtrack for several generations. The auction takes place the very week JOURNEY returns to the stage as one of the Lollapalooza headliners in Chicago, alongside the likes of FOO FIGHTERS, Megan Thee Stallion, Post Malone, Miley Cyrus and Tyler, The Creator. Past and present collide as Schon looks to the future: JOURNEY has also just finished its 15th studio album, its first in a decade.

"These are guitars I've been collecting for a very long time," Schon says, "and it's time to let go of some of my collection to make room for new arrivals."

At the heart of this auction is the 1977 Gibson Les Paul Deluxe Black Solid Body that Schon used on 1981's chart-topping "Escape". The Paul heard on "Don't Stop Believin'", "Stone In Love", "Who's Crying Now". The one heard — and seen — during the "Escape" tour, whose November 1981 Houston stop was originally broadcast on MTV then turned into a best-selling DVD in 2005. All by itself, the band's performance of "Don't Stop Believin'" from that show has been viewed more than 122 million times on YouTube.

The '77 Les Paul, Schon says with just a touch of understatement, "has quite a story."

"When I heard the final mix of 'Don't Stop Believin'', I turned around to everybody, and I go, 'Man, you know what? This song has something else,'' Schon recalls. "Honestly, that song has the weirdest and most unique arrangement ever. It goes verse, then into the guitar solo — the little breakdown that's more like a symphony. I actually learned it by listening to symphonies, that triplet that speeds up. It sounded like a train. And that pushed [Steve Perry and Jonathan Cain] to write the lyrics, because it reminded them of a train. So the guitar solo actually came before the lyrics did."

The '77 Les Paul will be joined by another iconic guitar with its own rich history that dates back to JOURNEY's earliest hit-making days: the 1974 Guild F-50R Natural Acoustic he used to write "Wheel In The Sky" and "Patiently", crafted with Perry in a Denver hotel room not so long after they first met in 1977. That guitar can be heard all over 1978's "Infinity", on which JOURNEY journeyed from its hard-prog and jazz-rock roots toward the sound that made them radio darlings — and prom-dance heroes — by that year's end.

"It was my room warm-up guitar, many years before Steve Perry came into the band," Schon says. "I had an endorsement with Guild at the time, and they made me that F-50. It holds that history, and it's on a lot of famous songs. 'Patiently' was the first song I wrote with Steve Perry in my room with that guitar. I had the chords that I'd been working on, and when he started singing them, we had a song like in about a half an hour, so it does have that history. And as we grew and the audiences got bigger, and the songs became, like, treasures to so many."

The Guild would find its way onto 1979's "Evolution", too, on such songs as "Daydream" and "Just The Same Way".

Also among the auction's astounding offerings is the 1969 Gibson Les Paul Goldtop a 17-year-old Neal used when he became Carlos Santana's dueling partner — and turned down Eric Clapton, who had wanted the teenage prodigy to join DEREK AND THE DOMINOS shortly before that all-star band's dissolution. This is the very guitar Schon used on SANTANA's acclaimed and influential third studio album, 1971's feisty "Santana III", which featured the hits "Everybody's Everything" and "No One To Depend On". It can be heard as well on 1972's jazzy, jammy "Caravanserai", a nearly all-instrumental record on which Schon shares songwriting credit.

Schon's father Matthew, a jazz musician and big-band arranger, bought Neal his first guitar, a Stella, when he was just 10 years old. It took him three months to learn the instrument, after which his dad bought him a 1963 Gibson ES-335 Sunburst. "That was the first great guitar I owned," Schon says. It was also the first great guitar he had stolen.

With the insurance money, Schon says, he bought a Gibson Barney Kessel, because he thought he wanted a jazz guitar. When it proved too big for 12-year-old Neal, he traded it in for the Goldtop Les Paul.

"And that was my main axe for the longest time," he says. "It's on all the SANTANA stuff I did. I mean, that guitar went everywhere with me. I played in every club in San Francisco, played with Elvin Bishop a lot, jammed with B.B. King at the Fillmore. I was up and down Broadway playing in every club I could with that guitar. And I loved that guitar. I mean, it just had amazing sounds. So I went from that guitar and finally got asked to join SANTANA when I was about 15 and a half. And so I was using that guitar on the record, exclusively. And then I decided I wanted to get a little bit different sound, because Carlos was playing a Les Paul, too."

The Neal Schon Collection spans decades and contains among its offerings such mythical must-haves as a 1959 Gibson Les Paul Standard Sunburst Solid Body Electric that would be the centerpiece of any guitar auction or collection. It's among the most coveted guitars ever made, possessing "a legendary quality, a musicality, a soul that's never been duplicated," David Schiller writes in his book "Guitar".

And Schon has two of them, both available in this auction.

"Everybody's like, 'Oh, that '59 Les Paul is the Holy Grail, how can you get rid of that?'" Schon says. "And I'm like, 'If I'm not going to play, I feel like somebody should be able to really play it, that's going to totally use it and appreciate it.' I don't feel good about having them all in cases, these guitars I'm never going to really play on albums or live or anything. They're not meant to sit there and look beautiful. Somebody should be utilizing them, and I should allow somebody to, because there are not that many of them around. And, quite frankly, I'm happy with what I'm playing."

Schon's collection numbers more than 800 guitars, enough, he says, to fill a museum (which he'd once planned to open with friend and fellow player and collector Joe Bonamassa). Collecting guitars, he says, "has been addicting" almost since childhood, and only more so since JOURNEY's earliest successes. He is parting with a portion of that collection only because "I've experienced them all," he says. "And it's time to share that experience with others, whether they're fans or fellow collectors. They're all so beautiful."

For that reason, Schon is also offering from his extraordinary collection these rare, stunning guitars, some of which Schon tweaked and personalized but almost all of which look and play as though brand-new:

"I don't think there's any one guitar that defines me — I define myself," Schon says when asked how he can part with the tools that shaped his sound for decades, whether with bands or on his solo offerings. "It comes from your fingers. It's in between your fingers and whatever amp you're plugging into and how you have that guitar set and your own picking style, how hard you pick, whether you use soft picks, hard picks. I mean, it all makes a big difference, man.

"Fifty-seven years now. That's how long I've been playing," says the 67-year-old Schon. "It's crazy, man. I mean, I should be so much better." He laughs. "All these guitars have a story, a history."

Heritage also enjoys the highest online traffic and dollar volume of any auction house on earth. The Internet's most popular auction-house web site, HA.com, has more than 1,400,000 registered bidder-members and searchable free archives of five million past auction records with prices realized, descriptions and enlargeable photos.