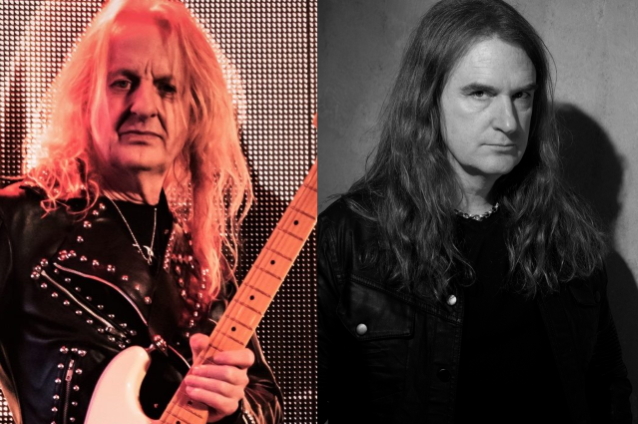 Former JUDAS PRIEST guitarist K.K. Downing has offered words of support for David Ellefson who was fired from MEGADETH last month after sexually explicit photos and video of the bassist leaked online along with allegations that he had been grooming a fan, which he vehemently denied.

Ellefson performed a full-length set of PRIEST classics with Downing, former PRIEST singer Tim "Ripper" Owens and ex-JUDAS PRIEST drummer Les Binks in November 2019 in Wolverhampton, United Kingdom. A couple of months later, Downing, Owens and Binks announced the formation of a new band called KK'S PRIEST, along with bassist Tony Newton, a founding member of the long-running British hard rock act VOODOO SIX. At the time, it was assumed that Ellefson's non-involvement with KK'S PRIEST was down to the fact that his main priority was MEGADETH, which was working on a new studio album.

Asked in a new interview with SiriusXM's "Trunk Nation With Eddie Trunk" if he hopes to have Ellefson involved with KK'S PRIEST in some way now that David is no longer a member of MEGADETH, Downing replied (as transcribed by BLABBERMOUTH.NET): "No. We're all consolidated now. We've actually been, obviously, working pretty hard for over a year and a half now together as a unit. And, obviously, we've got all of these videos we're about to release. So we're totally consolidated.

"But, yes, Dave and I, every now and again we're in touch, and, obviously, I did send David a text saying, obviously, 'You've got a lot of friends around the world,'" Downing continued. "And he does. He's not just liked — he's actually loved. Because he's such a gentleman. He gives time to… I prided myself in PRIEST, I really felt I was the one guy that was the very last person to hang out with the fans and just socialize and all of that. But David is exactly that person — he really is — and everybody says that about him.

"What happened — and I talk about it with other journalists and things like that — if this had happened in the '70s or the '80s, it would have just been put down to rock and roll," K.K. said. "He's no different to anybody else. We've all got strengths, and we've all got weaknesses, especially as men, I'm afraid. And so many have kept the doors closed where David messed up and left the door ajar, but he's no different to anybody else. So, I wish him well and everything, and I know that he will, obviously, come back, because he's so good. And he's an amazing bass player; there's no two ways about it. 'Cause when we did the gig at [the Wolverhampton club] Steel Mill, he flew in. We had one rehearsal, in the freezing-cold rehearsal room. He just got off the plane — and Ripper as well — and we ran through the set once. Then we went out and did the show, for better or for worse."

On May 24, Dave Mustaine — who formed MEGADETH with Ellefson in 1983 — announced the bassist's departure from the band, saying, "We do not take this decision lightly. While we do not know every detail of what occurred, with an already strained relationship, what has already been revealed now is enough to make working together impossible moving forward," Mustaine wrote. Two days later, Ellefson released a follow-up statement in which he vowed to file a "defamation lawsuit" against the person who "illegally posted a very private video" of the bassist and made "false allegations" against him. He also said he was working with the police in Scottsdale, Arizona "in their investigation into charges regarding revenge pornography to be filed against the person who posted the video. This person will be prosecuted to the fullest extent of the law," Ellefson wrote. He went on to say that he was "taking this time to be with my family" and wished his "bandmates" the best with their upcoming tour.

David, who became a Lutheran pastor nearly a decade ago, and his wife Julie Ellefson have been married for 27 years. They have two children, Roman Alexander (25) and Athena Grace (22).