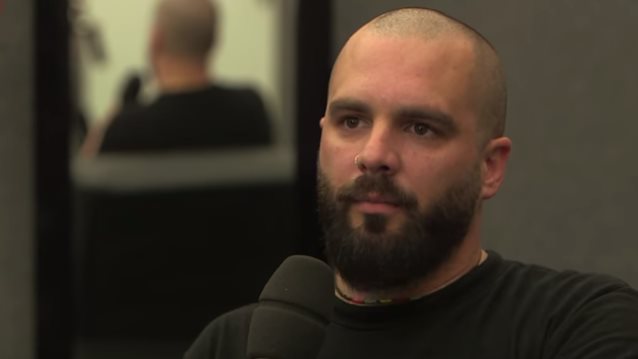 ARTE Concert conducted an interview with KILLSWITCH ENGAGE singer Jesse Leach at this year's edition of the Rock Am Ring festival, which was held earlier this month in Germany. You can now watch the chat below.

Speaking about where he finds the inspiration for his lyrics, Leach said: "I'm all about just going away and escaping. If I'm in a nice city or there's a park nearby, I just go and get lost in the city. That's one of my favorite things to do on tour. I really enjoy going to a pub by myself and striking up a conversation with a stranger, making a new friend. That excites me. And it's something that I use to help inspire me to write as well — just interacting or even just observing people in general. It's fun — people watching; going to a place and just sitting outside and watching people walk by. [I] love that kind of stuff."

Leach also spoke in detail about the lyrical theme covered in one of the tracks on KILLSWITCH ENGAGE's latest album, "Incarnate". He said: "It's kind of general, but one song in particular off our new record was inspired by a woman who was a domestic-violence survivor, someone who was beaten and abused and had the strength to leave and start her life all over again. So I wrote the song 'Quiet Distress' for her, which is basically about coming out of a really dark place. I mean, how can you not be affected by a story like that? And that happens all the time. It's a very common thing, but, you know, we don't talk about it in society enough. So, for me, it's important to bring that type of stuff up to make it part of the discussion that we need to keep talking about. Whether it's mental illness, drug abuse — all that stuff. We should have a conversation about it. And as an artist, I feel a responsibility to put that kind of stuff in my lyrics — make music that matters. It's not just noise; you know, there's a message there."

He continued: "I'm actually very vocal on social media about my mental illness. I deal with depression and anxiety. I think a lot of artists do. The left-side-of-the-brain, creative people usually have a lot of issues, and I'm proud to speak up about it, 'cause I know it helps people. And that whole stigma of, like, macho… I think the machoness comes from talking about, having the balls to talk about it and to get through it. It's something I struggle with on a daily basis, and I think it's important, once again, just to talk about it."

"Incarnate" debuted at No. 6 on The Billboard 200, having shifted 35,000 equivalent album units in the week ending March 17.