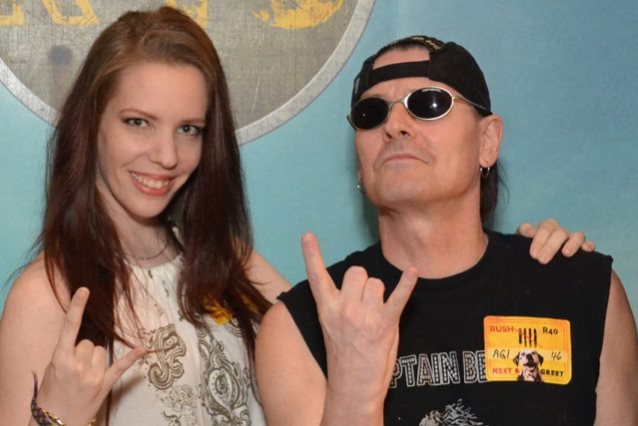 Zita, who has been performing with KING DIAMOND as a backing vocalist since 2003, is unable to join the group on the road for the next few shows as she is taking care of the baby boy, who was named after King's favorite singer of all time, late URIAH HEEP frontman David Byron. Filling in for her is Hel Pyre from the Greek metal band AFTERBLOOD.

King Diamond, whose real name is Kim Bendix Petersen, told the Danish web site BT.dk in a 2009 interview that he spoke to Livia for the first time around fifteen years ago when she interviewed him over the phone for the Hungarian edition of Metal Hammer magazine. "We got along incredibly well. And afterwards I couldn't stop thinking about her," King said.

"We were both going through a hard time in our lives," he continued. "And we clicked. At some point, I asked her if she would send a photograph of herself. We had talked together for months. But I didn't know how old Livia was… nor how she looked, and when she told me how old she was, I simply couldn't believe it."

Despite the fact that the 61-year-old King is 28 years her senior, Livia said that she was not concerned. "Our ages are just numbers," she said. "We are soulmates."

Regarding how their relationship developed, Livia said: "We talked at first over the phone. Then he went to Hungary, where he, on our first night together, proposed both in English and in German — so that my father would understand it. I, of course, said yes. He and I are just made for each other."

King, who has lived in suburban Dallas, Texas for more than two decades, told Metal Hammer last year that he has "become a lot healthier" since he underwent open-heart triple-bypass surgery in 2010. He said: "I gave up smoking after my heart scare, my wife keeps me on a strict diet that I follow completely, and doctors are amazed at how healthy I am these days. Honestly, I think I am now healthier than I have ever been."

He continued: "I've also found that, since I made a real effort to have a healthy lifestyle, my voice has improved so much. I can now hit notes that were a struggle for me when I was younger. As for my sex life, that's just great now. And I am not saying that because my wife is sitting next to me!"