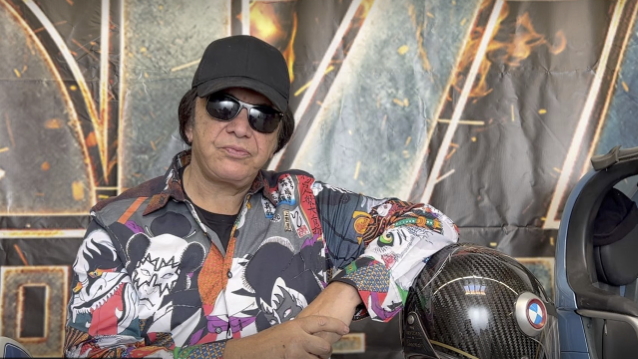 Gene Simmons has once again blasted people who are defiantly skeptical of COVID-19 vaccines, calling them "delusional" and the "enemy" and saying they are posing a risk to themselves and to all those around them.

The KISS bassist and co-vocalist discussed his views on anti-vaxxers while participating in a live interview on Wednesday (November 10) on the livestreaming social selling online network TalkShopLive to promote deluxe versions of the band's 45th anniversary edition of "Destroyer".

Speaking about KISS's annual Kiss Kruise, which concluded earlier this month, Simmons said (as transcribed by BLABBERMOUTH.NET): "[It was] really a terrific time. Unfortunately, our European friends and other friends around the world — I prefer 'friends' to 'fans' 'cause it's really become sort of like a family — couldn't come as easily on the cruise because you had to have been vaccinated.

"I don't care about your political beliefs. You are not allowed to infect anybody just because you think you've got rights that are delusional, of course," he continued. "You don't have the right to go through a red light; actually, the government has the right to tell you to stop. You have to put on a seat belt. If they tell you you can't smoke in a building, you can't smoke in a building. And that's not because they wanna take away your rights; that's because the rest of us hate it. We don't wanna smell your smoke. I don't wanna catch your disease. I don't wanna risk my life just 'cause you wanna go through a red light.

"This whole idea, this delusional, evil idea that you get to do whatever you want and the rest of the world be damned is really terrible. You've gotta identify those people and bring 'em out into the open, so you know who they are.

"Know who your friends are by how much they care about you," Gene added. "That includes COVID. If you're willing to walk among us unvaccinated, you are an enemy."

Simmons also touched upon conspiracy theorists and anti-science die-hards who think that COVID-19 is a hoax, saying: "For those that don't believe this is real, over five million human beings have died from COVID. I know — there are Flat Earth Society people who believe in all sorts of things [who say] they died because they were fat or because they smoked. No, bitch — they died because they got COVID. And there are still a lot of people who don't believe that, and you have to find out who those people are.

"I don't care if you play football or not — stay away from evil people who don't care about your health."

Gene went on to lament the politicization of the coronavirus vaccines, saying: "It has become political, unfortunately. The far left and the far right are both evil; they both spread all kinds of nonsense. I don't like either one of them. Politics are the enemy. Humanism and humanity is what we should all be concerned about. Love thy neighbor as thyself.

Back in August, Simmons tested positive for COVID-19 despite being vaccinated. His bandmate Paul Stanley also caught the virus, leading the band to postpone a handful of concerts.

Late last month, Rolling Stone magazine published a story in which a group of KISS roadies suggested that the lack of COVID protocols enforced on the band's "End Of The Road" farewell tour led to the death of a longtime guitar tech, 53-year-old Francis Stueber. Stueber died of coronavirus in his Detroit hotel room on October 17, just two days after being quarantined. The crew members claimed the tour didn't take strict enough safety measures, including not testing everyone regularly. In addition, some crew members allegedly disguised their illness and/or faked vaccine cards.