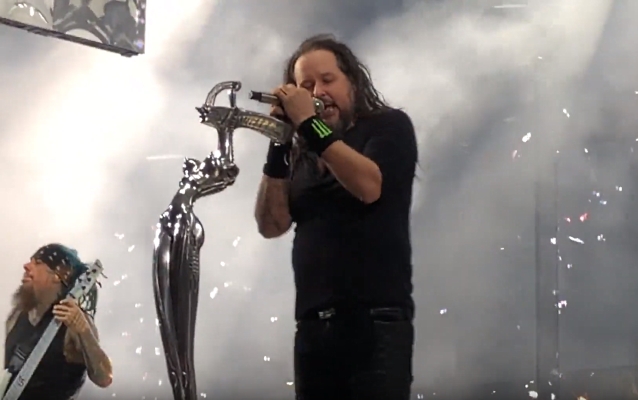 KORN performed its new single, "You'll Never Find Me", live for the first time last night (Thurday, July 18) at the opening show of the band's co-headlining tour with ALICE IN CHAINS at Austin360 Amphitheater in Del Valle, Texas. Fan-filmed video footage of the performance can be seen below.

"You'll Never Find Me" is taken from KORN's upcoming album, "The Nothing", which will be released on September 13 via Roadrunner/Elektra. The follow-up to 2016's "The Serenity Of Suffering" was once again produced by Nick Raskulinecz.

KORN guitarist Brian "Head" Welch told The Pulse Of Radio about the band's 13th studio LP: "I would say that it's like a continuation of our last record. It's really guitar-heavy and energetic — there's a lot of energy. We came back to the root of what KORN is, in our sound, in the lyrics and in the feel of the songs. And so what KORN started out to be, I feel like we're doing that right now."

KORN frontman Jonathan Davis told Kerrang! magazine that he is "really, really, really proud" of "The Nothing". "I worked really hard on it," he said. "The rest of the members worked hard and really did a great job. It's a very dark record."

Davis, whose estranged wife Deven died last August, said that the album reflected events in his life, explaining: "It's basically me dealing with all the stuff that happened to me last year. Very emotional for me, but it is what it is. I can't wait for people to hear it. I really spent a long time on doing what I wanted to do this time."

While he shied away from calling "The Nothing" a concept album, Davis did say making the album was both difficult and therapeutic. He remarked: "It sucked. I'm not gonna say it didn't. It was just really hard. But that's how I've always dealt with all my problems — just throwing my heart and soul into my art."

KORN's tour with ALICE IN CHAINS will hit nearly 30 cities before wrapping on September 4 in Mountain View, California. 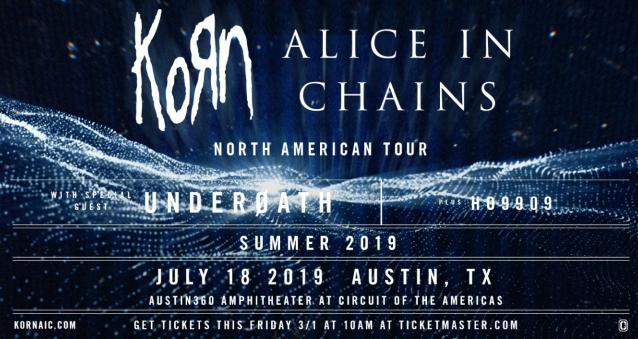