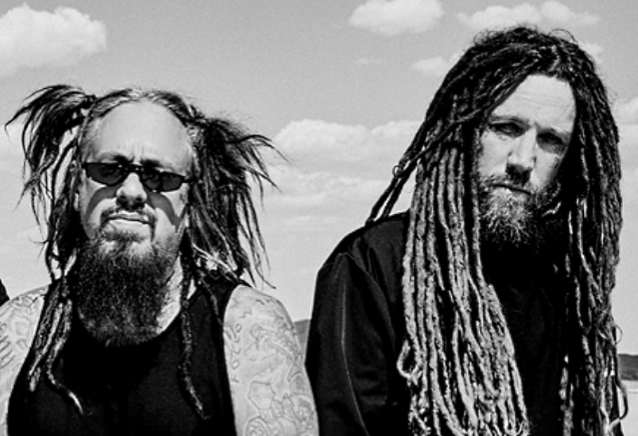 KORN guitarist Brian "Head" Welch spoke to Tommy Carroll from 97.9 GRD about the curent status of the band's bassist, Reginald "Fieldy" Arvizu. Fieldy announced last month that he would sit out KORN's current tour in order to "heal" after "falling back" on some of his "bad habits."

Speaking last Friday (July 16) at the Upheaval festival in Grand Rapids, Michigan, Welch said (as transcribed by BLABBERMOUTH.NET): "Fieldy is good, man. He's at home, and he's with his kids. I wanna say that Fieldy's a good dad. He's a good dude, and he has his life structured. The bad habits he talked about in the press — everyone has their issues in life. But those he'll work on in his own way. But that dude is — I look up to him as a dad, actually. He's had five kids. He always says, 'I've got two thousand kids,' 'cause it feels like it some days. But he's a good dad. He's gone through a lot, man, personally, and he just needs some time off to reflect on himself and his family. That's it."

Welch went on to say that everybody in the KORN camp is still on good terms with Fieldy and they are all looking forward to him returning to the band in the not-too-distant future.

"Dude, no judgment at all to anyone," he said. "I was the worst with addiction. So, it's nothing like that. It's all good vibes. There's no negative vibes as far as no hard feelings on either side. So it's all good, man.

"I think [Fieldy] and Jonathan [Davis, vocals] and Munky [James Shaffer, guitar] have gone 26 years with hardly any breaks, man — with a record cycle and a tour. I got eight years off, so I'm rested. And I come back. I'm hopefully looking at Fieldy like he's just gonna take a break, man, and get recharged. So we'll see."

Regarding how KORN ended up recruiting Roberto "Ra" Díaz (SUICIDAL TENDENCIES) to fill in for Fieldy, Welch said: "Well, there's COVID and everything, so when we started talking about it, it was a thing where we wanted to be careful still and whatnot. 'Cause it was a couple, a few months ago or whatever. So we just started brainstorming and hitting up friends and whatnot. We need the slap — we need the slap bass, we need the finger playing, we need someone, 'cause Fieldy is unique — very unique. So it just kind of happened that way, man, where Ra, he was open because SUICIDAL is not going out until next year. I think Mike Muir has a back surgery or something this year. So it just worked out, man. He came down, we jammed. He's a really humble guy, and just very talented. He can play anything — from jazz to slap to anything. He played all the songs with, like, three mistakes out of 10 songs or something — little mistakes. I mean, not even mistakes — it was just, like, 'I thought I heard it that way.' They weren't even mistakes. So we were, like, 'Okay. You got it down.'"

On June 21, Fieldy broke the news of his absence from the trek, writing in a social media update: "To all KORN fans worldwide. The past 6 years I've been dealing with some personal issues that at times have caused me to fall back on some of my bad habits and has caused some tension with the people around me. It's been suggested to me to take some time off to heal. I'm going to respect what was asked of me and take that time. Unfortunately you will not see me on stage with my band. I will be working towards getting the bad habits out of my system. In the meantime I will be staying creative to keep my mind & soul in a good place.

In May, KORN announced a U.S. summer tour featuring special guests STAIND on all dates. Produced by Live Nation, the coast-to-coast 28-city outing will kick off August 5 in West Palm Beach, Florida and make stops in Long Island, Detroit, Irvine, Phoenix, Austin and more, before wrapping up with a performance at Dallas' Dos Equis Pavilion on September 21. Furthermore, both bands will perform at Louisville, Kentucky's Louder Than Life festival on September 23.