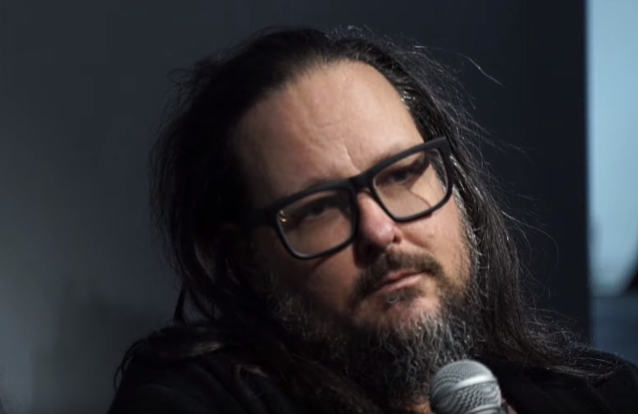 Earlier today, KORN frontman Jonathan Davis spoke to Kerrang! magazine about the band's new album, "The Nothing", which will be released on September 13 via Roadrunner/Elektra. The follow-up to 2016's "The Serenity Of Suffering" was once again produced by Nick Raskulinecz and includes the first single, "You'll Never Find Me", which was made available this morning.

"It's a record I'm really, really, really proud of," Jonathan said (see video below). "I worked really hard on it. The rest of the members worked hard and really did a great job. It's a very dark record.

"It's basically me dealing with all the stuff that happened to me last year," continued the singer, whose estranged wife died last August. "Very emotional for me, but it is what it is. I can't wait for people to hear it. I really spent a long time on doing what I wanted to do this time. No producers came in. And people trying to get me to do one thing this way or the other way — everybody was overthinking a lot of things — but I finally was fed up with it and kicked everyone out and said, 'It'll be done when it's done.' And I locked myself up in my studio and spent a long time reflecting and just healing and making my art. And a couple of months later, I came out and it's done and I just can't wait for you to hear it. I can't explain much."

Elaborating on the lyrical themes covered on "The Nothing", Davis said: "The whole record is — I wouldn't say a concept record, but it's about basically the same thing. All the different songs are about this dark energy that's followed me around. And with all the things that were going on last year, me embracing it, running from it, just trying to navigate myself through all the chaos that I was having at that time."

Asked what creating "The Nothing" was like in terms of the healing process for him and everything he was going through, Jonathan said: "It sucked. I'm not gonna say it didn't. It was just really hard. But that's how I've always dealt with all my problems — just throwing my heart and soul into my art. And I went through it, and it was very hard — there were some emotional times — but it was nice just being alone by myself with my engineer. That was it; it was just the two of us in the studio. On the last couple of records, I had my kids there, and I was just all over the place. This time, I could really concentrate and do what I had to do and get out what I needed to get out."

Speaking about the musical direction of "The Nothing" compared to some of KORN's previous records, Davis said: "It's just a different beast. This time, the band really brought it — they did really cool things, fresh-sounding stuff. I think the biggest difference is what I did vocally on it. I wasn't in a hurry; I wasn't in a rush to get stuff done. I didn't settle. I had time. I'd record something and I'd take it home and listen and go, 'Ehhh. I don't know.' But it was just me finding myself. I wasn't listening to producers or other people having their opinions. It was just my thing. And then sometimes I'd be more critical than a producer, but I had that luxury at the time."

"The Nothing" is available to preorder now via KORN's official web site. Included is a limited-edition bundle that contains an autographed copy of the new album on CD or vinyl, a t-shirt, a mirrorboard lithograph print, a bag of Korn Koffee Wired Roast and a Korn Koffee tumbler.

KORN and ALICE IN CHAINS will embark on a co-headline amphitheater tour across North America this summer. UNDEROATH will join as special guest on all dates, with HO99O9 and FEVER 333 opening on select dates. Produced by Live Nation, the 30-city outing will kick off July 18 in Del Valle, Texas at Austin360 Amphitheatre and make stops in Dallas, Nashville, Toronto, Denver and more before wrapping September 4 in Mountain View, California at Shoreline Amphitheatre.