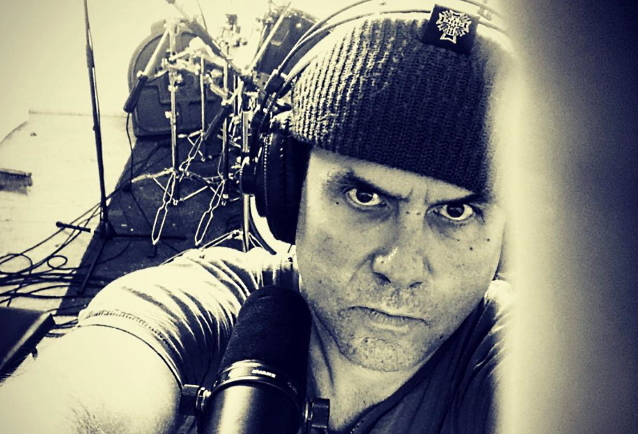 German thrash metal veterans KREATOR are working on material for their new album, tentatively due in 2021.

Earlier today (Thursday, September 10), KREATOR mainman Mille Petrozza posted an Instagram photo from the studio and he included the following message: "In case you have wondered what @kreatorofficial was up to in the last couple of months. Songwriting for a new album. Vocal recordings today! METAL! #kreator #thrash #zfe #altenessen #metal #vocals #vegan #satan #thiswillkillcovid1"

This past March, KREATOR surprise-released a new single, "666 - World Divided". The song was produced by Andy Sneap and Markus Ganter and was recorded at Hansa Tonstudios in Berlin, Germany.

The music video for "666 - World Divided" was created under the direction of Jörn Heitmann, who was responsible for the music videos for "Radio" and "Ausländer" by RAMMSTEIN.

Before joining KREATOR, Leclercq rose to fame with U.K.-based extreme power metallers DRAGONFORCE for whom he handled bass duties from 2005 until August 2019.

When his addition to KREATOR was first announced in September 2019, Leclercq said: "Joining KREATOR is an honor as well as a huge step up in my musical journey. I've been friends with Mille for over 15 years and a lifelong KREATOR fan. I have to pinch myself every day to believe that I'm now a part of one of the best and most influential bands in the genre. I look forward to the many adventures ahead and getting well acquainted with the legendary KREATOR Hordes!"

KREATOR's previously announced "State Of Unrest" European tour with LAMB OF GOD has been rescheduled for 2021 in the wake of the coronavirus (COVID-19) pandemic.

KREATOR released a new live set, "London Apocalypticon - Live At The Roundhouse", in February via Nuclear Blast. The effort was professionally filmed and recorded on December 16, 2018 at the Roundhouse in London, England.

The band's most recent album, "Gods Of Violence", arrived in early 2017.


In case you have wondered what @kreatorofficial was up to in the last couple of months. Songwriting for a new album. Vocal recordings today! METAL! #kreator #thrash #zfe #altenessen #metal #vocals #vegan #satan #thiswillkillcovid1 9