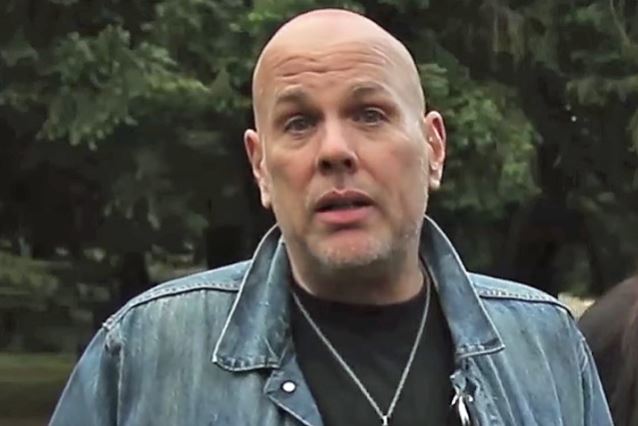 METAL CHURCH founding guitarist Kurdt Vanderhoof was interviewed on a recent edition of the "Talk Toomey" podcast. You can now listen to the chat using the widget below.

Speaking about METAL CHURCH's relationship with the bands from the early Seattle "grunge" scene like NIRVANA, Kurdt said: "I know Krist [Novoselic, NIRVANA bassist]; he was kind of a friend of mine. They kind of came out to our rehearsals and stuff when we'd have party rehearsals where we started. But, for the most part, we were a big joke to them. They were the cool guys and we were the old metal guys. Even on [NIRVANA's] 'Bleach' [album], [Kurt] Cobain spelled his name like mine — Kurdt. I could never quite figure that out, but I kind of put two and two together, and they were poking fun. Like the MELVINS think I'm just obnoxious and all this stuff, 'cause they're too cool. And we're a bunch of rock stars, and they're too cool. So, you know, fuck 'em."

Kurdt added that he "never had any trouble" with NIRVANA and said that he "always liked" their music. "I thought it was great," he said. "And I liked the MELVINS, and I thought we were friends, especially Buzz [Osborne] and I. And then I come to find out later that we were a big joke, and I was a big joke to all these guys."

He continued: "I never did anything to them. I always liked them. I thought they were great. I thought we were friends. But the whole NIRVANA thing, I kind of figured out later through talking with people that when they were doing their thing, 'cause they were all punky and cool, that we were the metal guys and we're stupid and we're posers and rock stars. So it was really cool not to like us — especially me, being from Aberdeen, and those guys being from Aberdeen, they were, like, 'Fuck those guys!' Oh, well."

According to Vanderhoof, not all the bands from the Seattle grunge scene were disrespectful to METAL CHURCH. "[The ALICE IN CHAINS] guys are great," he said. "Yeah, I like all those guys. Those guys have been really cool, and still cool to us and everything too. But the Grays Harbor bands — you know, the NIRVANAs and the MELVINS and all that kind of stuff — they, again, especially had something against me, apparently. So I thought we were friends, but apparently not. So… fuck those guys."

Mike Howe, who previously fronted METAL CHURCH from 1988 until 1994, is featured on the band's new album, "XI", which will be released on March 25 via Rat Pak Records. The CD was produced by Kurdt Vanderhoof and co-produced by Chris "The Wizard" Collier.

TRANS-SIBERIAN ORCHESTRA and SAVATAGE guitarist Chris Caffery will fill in for METAL CHURCH's Rick Van Zandt on the latter band's upcoming U.S. tour, which commences March 24 in Portland, Maine. Rick had to go in for emergency eye surgery to repair a detached retina and will be unable to join the group on the road for several weeks.