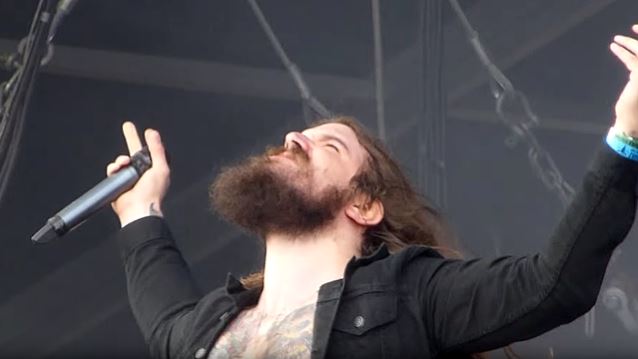 Mike James Rock Show conducted an interview with singer Erlend Hjelvik of Norwegian rockers KVELERTAK during the band's current European tour with SLAYER and ANTHRAX. You can now watch the chat below.

Speaking about what KVELERTAK has been up to the last few months, Erlend said: "We've had some time off this year and the end of last year and we've just been working on new material and doing the occasional show here and there. But we've been working on the new album since before the summer — just been spending a lot of time on that. [We're] almost [done putting together all the tracks]. We're missing maybe, like, two songs, so we'll just get on that once we get home now."

According to Erlend, there is no concrete release date in place yet for the new KVELERTAK album, but fans who have seen some of the band's recent headlining shows might have gotten a taste of one new track which will appear on the forthcoming effort. He said: "We've been playing one new song on the 'off' shows [from the SLAYER tour], and it seems to be going over pretty well. It's just fun for us to play something new too and see how it works live. It's just cool to put something new on the table instead of playing the same stuff we've been doing for [the last couple of years]. It gives the people a reason to come out and watch us again."

KVELERTAK's follow-up to 2013's "Meir" is tentatively due before next summer.