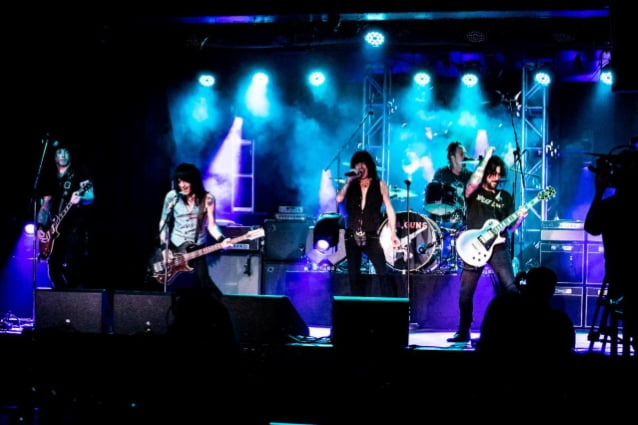 L.A. GUNS singer Phil Lewis was asked in a new interview with Metal Rules if the band is "in a good place now with the right people." He responded: "Well, I would like to say yeah, but not really. Everything is cool with Johnny [Martin], our bass player, and Adam [Hamilton], who is our engineer. He has done everything from playing bass, rhythm guitar, and this time [on L.A. GUNS' latest album, 'Checkered Past'] he played drums. Because of the pandemic, we needed to record with someone who had their own setup, and Adam had it.

"As much as we would have liked to have brought our touring drummer Scot Coogan in, it just wasn't possible. He didn't have a studio, and we didn't have a way to get him over to Adam. So, unfortunately, he decided to quit. Which is fine — he is a busy guy and involved in a lot of other projects. We wish him well, and I understand his frustration that we have an album coming out, and he isn't on it. So, we got Shane Fitzgibbon back on drums. He is a wonderful boy — I mean, a cool guy who played on the first two albums during the reunion. He agreed to come back and fill in for a bunch of shows. We are not sure how long he will stick around because he is committed to other projects in L.A. That's the reason he is not in the band in the first place. So, we have been in a little bit of turmoil there, finding a great drummer with a great personality. We did take a hit, and I'm really upset about it. We just have to roll with it and move on."

In a 2020 interview with SFL Music Magazine, Lewis called Hamilton "an honorary member" of L.A. GUNS. "I mean, he's been in this band three times in a different capacity," he said. "He's been a bass player; he's been a drummer and a guitar player. The only thing he hasn't done is been a frontman. He could do that too, I have no doubt."

Due on November 12 via Frontiers Music Srl, "Checkered Past" marks L.A. GUNS' third album since the 2016 reunion of the band's core members Lewis and guitarist Tracii Guns. It follows 2017's "The Missing Peace" and 2019's "The Devil You Know".

Written and recorded during late 2020 and early 2021, "Checkered Past" sees Guns, Lewis and company continuing with the darker lyrical tone of "The Devil You Know" and "The Missing Peace", while incorporating their classic rock influences into the mix.

L.A. GUNS performed its second album, 1989's "Cocked & Loaded", in its entirety on November 28, 2020 at the Fremont Country Club in Las Vegas, Nevada. The event was livestreamed via Veeps.