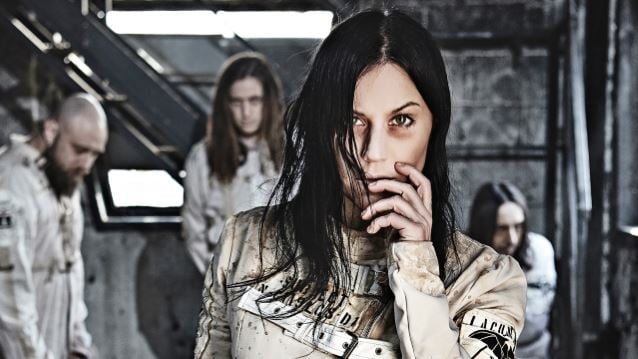 LACUNA COIL singer Cristina Scabbia was interviewed on the latest installment of "The MetalSucks Podcast". You can now listen to the chat in the YouTube clip below.

Asked if she takes care of herself on the road by living a healthy lifestyle, Cristina said: "I'm not obsessed with healthy living. I know it's a big thing now. And everywhere I see, it's about 'eat healthy, work out' and it's driving me nuts, because I take it so easy. I mean, I try to eat healthy every once in a while, but I eat shit every once in a while.

"My life is really balanced. I try to do things in a way that they are pleasing me, because they are wrong to do sometimes, but at the same time, I try to eat in a proper way, drink a lot of water, try to sleep as much as I can, to rest my body, but I don't do anything special or obsessive to take care of myself… It would drive me crazy to think too much about it. I want to live life. I mean, that's what we're here for. We only have one life, and I wanna take care of mine, but I don't wanna go crazy about it and spend my life worried about the fact that I have to take care of my life. I want to enjoy it."

She added: "I mean, I don't do drugs, just because I'm not interested. I don't drink a lot, just because I am fine drinking a beer every once in a while. But it's not because of self-control or because I'm straight edge or anything like that. It's just who I am, without any stress."

Cristina also talked about how she protects her voice from strain while she is touring with LACUNA COIL. She said: "My problem with my voice is that I talk a lot; that's my only problem. That really is. Because, as I said, I don't smoke, I don't drink very often, and it is not to protect my voice, but I talk a lot and that's fucked up."

She continued: "We did a show with HALESTORM and we ended up with in an arcade bar that was right in front of the buses pretty much. And we had a great time — we met fans, we played with them, and I started to talk with them. So it's like I had a beer, which is nothing — one beer — but I talked all night long, so today my voice is just like, 'Ugh. Ugh. It hurts.' Just because I talked. So that is my main problem."

LACUNA COIL's new album, "Delirium", will be released on May 27 through Century Media. The CD was recorded at BRX Studio in Milan between December 2015 and February 2016. The effort was produced by LACUNA COIL bassist and main songwriter Marco "Maki" Coti-Zelati, with engineering by Marco Barusso and additional assistance from Dario Valentini. Coti-Zelati also created the artwork for "Delirium", which is based on an atmospheric session captured by Italian photographer Alessandro Olgiati.