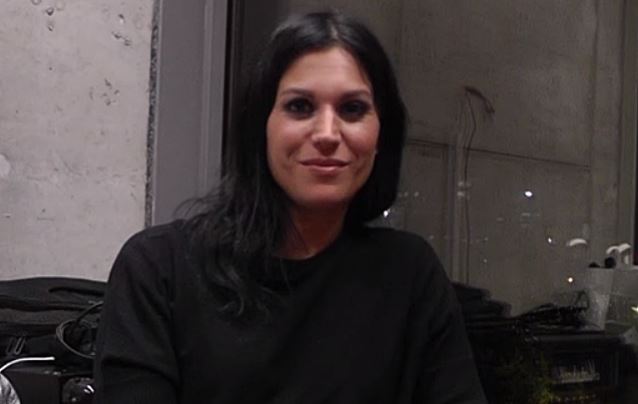 Lisa-Marie Cantus conducted an interview with vocalist Cristina Scabbia of Italian heavy rockers LACUNA COIL last October at the Female Metal Event in Eindhoven, The Netherlands. You can now watch the chat below.

Asked for her opinion on festivals featuring only bands with female singers, Cristina said: "I like them, because there is a big part of fans that are enjoying this type of music, and it's cool that you can actually offer a festival with bands that are playing that style. I'm not very happy about the 'female-fronted' term, just because, for me, it's very natural to think about a female in a band as a person like any other in the band. So I don't do the separation in between guys and girls. It's just, like, you can be a singer, you can be a guitar player, drummer… but I don't do the separation of the sex in the band. But I'm glad that there is a chance to have a festival like that where the crowd can just go and know that they're gonna find this type of music and female voices performing."

Scabbia also talked in more detail about her views on females in the heavy metal genre. She said: "I think that whoever says… I said it too, and I say it, that we need more girls in the scene. But it's not because I am only supporting the female-fronted bands. It's more because music is for everyone, so... Metal, it's pretty much the only genre — because I cannot think of any other else — that is still a little bit conservative when it comes to talk about a female in the band. It's still, like, 'Oh, it's metal. It's weird to have a female in the band.' And, to me, it's really weird. I mean, I've been doing this for almost twenty years, and I never thought [of] myself as the female element in the band; I always thought [of] myself as… I'm a singer in the band."

Guitarist Marco "Maus" Biazzi recently left LACUNA COIL. He said in a statement: "I felt I couldn't add more in this project any longer so I decided to leave my second family, LACUNA COIL, to take a different path for a new challenge in my life.

LACUNA COIL will tentatively release its new album, "Delirium", in May via Century Media. The CD was recorded at BRX Studio in Milan with producer — and LACUNA COIL bassist and main songwriter — Marco "Maki" Coti-Zelati, with engineering by Marco Barusso and additional assistance from Dario Valentini.