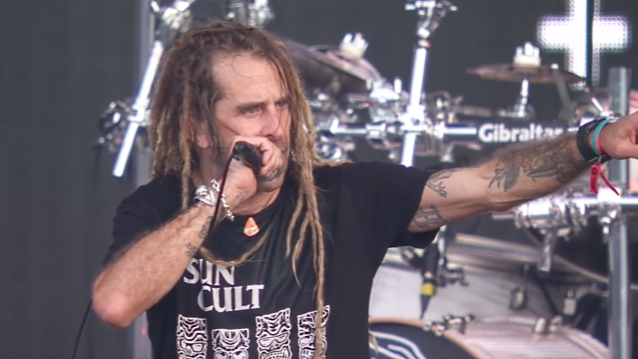 Richmond, Virginia metallers LAMB OF GOD have shared a video teaser for what appears to be their next album. The clip, which can seen below, features footage of the band in the studio and ends by displaying the LAMB OF GOD logo along with the number "2020," which presumably refers to the year when the record will arrive.

LAMB OF GOD's upcoming disc will be the follow-up to "VII: Sturm Und Drang", which was released in 2015 to global critial acclaim. The band has since issued the celebrated "The Duke" EP in 2016 as well as the cover album "Legion: XX" under its original name, BURN THE PRIEST, in 2018.

This past July, LAMB OF GOD officially parted ways with drummer Chris Adler. His replacement is Art Cruz, who has previously played with PRONG and WINDS OF PLAGUE, and filled in for Adler on several LAMB OF GOD tours in the past couple of years.

When Adler's absence from LAMB OF GOD's summer 2018 tour was first announced, he released a statement saying that he had been undergoing physical and occupational therapy for injuries he sustained in a motorcycle accident in late 2017.

This past January, Art was asked by American Musical Supply what it has been like making a transition between playing his own drum parts to reproducing somebody else's material. He responded: "Chris is my buddy, so to be sitting in his place while he situates his stuff, it's been tough, because it's my favorite band ever — that was my dream to even be up next to them. But it's been a little bit of challenge, because it's big shoes to fill. But I'm having fun with it, the band is having fun with it, and it's been great — it's been phenomenal."

Art went on to say that he didn't have to alter his playing style in order to accommodate LAMB OF GOD's music. "I've been looking up to the band, like I said, since day one, so they inspired me from the get-go," he said. "So I didn't have to change too much. I think I had to focus a little bit more. 'Cause I'm usually just kind of whaling. But I would say it's a little bit more focused and intense. Especially when there's, like, fifty thousand people staring at you, in relation to two thousand or five hundred."