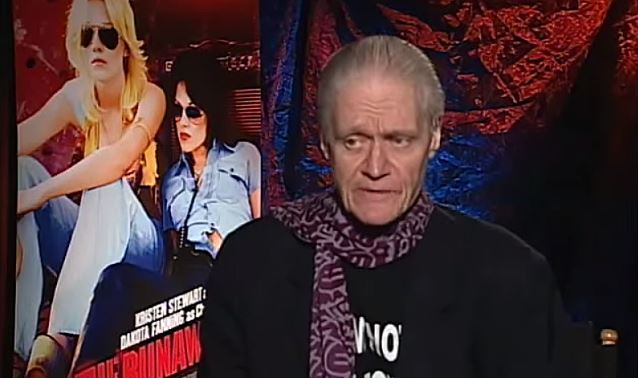 Fowley is best known for his role behind a string of novelty and cult pop rock singles in the 1960s, and for managing THE RUNAWAYS in the 1970s. He produced the band's 1976 self-titled debut and co-wrote THE RUNAWAYS' biggest hit, "Cherry Bomb", with Joan Jett. Fowley was also a songwriter, who co-penned "Escape" for ALICE COOPER's 1975 album "Welcome To My Nightmare", and "King of the Night Time World" and "Do You Love Me" for KISS's 1976 LP "Destroyer".

Despite the fact that Fowley had been embroiled in legal battles with former THE RUNAWAYS frontwoman Cherie Currie over the years, the singer cared for Fowley during his fight with cancer and she even moved him into her Los Angeles-area home.

"I love Kim. I really do," Currie told Billboard.com last year. "After everything I went through as a kid with him, I ended up becoming a mom and realized it was difficult for a man in his 30s to deal with five teenage girls. He's a friend I admire who needed help, and I could be there for him."

Currie posted the following message on her Facebook page earlier tonight: "Just before 8 a.m. this morning, January 15, 2014, Kim Fowley passed away at his home with his wife, Kara Wright, by his side after a long battle with cancer. He was 75 years old.

"I am so blessed that I got to get to know you again, Kim, really get to know you on a personal level and that we became friends. Mostly that you spent time here at my home. It's a time I will never forget.

"The last record you made is in good hands and I am so glad that record is mine. It was a pleasure.

"Thank you for starting my career when I was a just a child. You were instrumental in so many getting started in this crazy world of music. You are a genius... you are loved. You will be so missed.

"Rest in peace, my friend."

In a 2012 statement posted on the San Diego Reader web site, Fowley said: "I am preparing for death. That includes withdrawing from all human contact except for accountants, attorneys and industry meetings

"I am working on dying. I am a bladder cancer surgery recall patient. Every six months wires, cameras and instruments of pain such as knives and scalpels go in through the penis all the way up to my stomach. They take out elements of my body and do biopsies. Bladder cancer is the fastest recurring cancer but you can't do a CAT-scan or an X-ray or any other mumbo jumbo. You have to keep repeating the procedure in order to know how your margins are.

"To deal with that kind of Auschwitz intrusion on your body in a hospital setting is horrifying.

"Death is a juicy topic. It's like nudity and drugs. It's right up there with LOL, cats and puppies. It's an American tradition, just like Disney and chocolate."

The 2010 biopic "The Runaways" was based on the book "Neon Angel" by Currie, and it presented Fowley as aggressive and domineering in relation to the band he helped form.

In the movie, Fowley was portrayed by "Revolutionary Road"'s Oscar-nominated Michael Shannon.