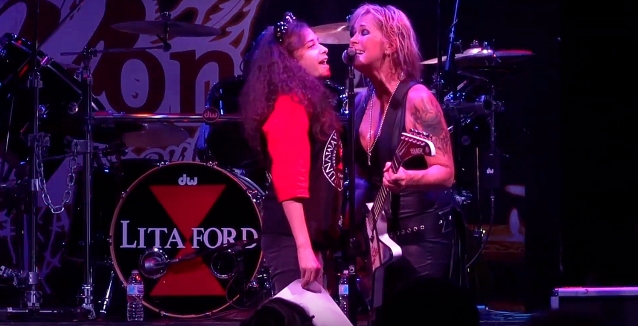 Lita Ford invited 12-year-old Helena Harris to sing "Kiss Me Deadly" with her during her August 31 concert at the Canyon in Santa Clarita, California. Video footage of the performance can be seen below.

"Kiss Me Deadly" is Ford's signature song and the most successful track she has recorded on her own ("Close My Eyes Forever", her duet with Ozzy Osbourne, charted higher in the U.S., peaking at No. 8).

Earlier this year, Lita told The Metal Voice that she was putting the finishing touches on the follow-up to 2012's "Living Like A Runaway" album. Helming the new project once again is guitarist/producer Gary Hoey, who contributes some guitar playing to the disc, alongside the rest of Ford's backing band, which continues to consist of guitarist Patrick Kennison, drummer Bobby Rock and bassist Marty O'Brien.

Ford's last release was 2016's "Time Capsule", a collection of songs that were recorded by Lita in the past, but never before made available.

Three years ago, Lita released an autobiography, "Living Like A Runaway: A Memoir", via Dey Street Books (formerly It Books), an imprint of HarperCollins Publishers.