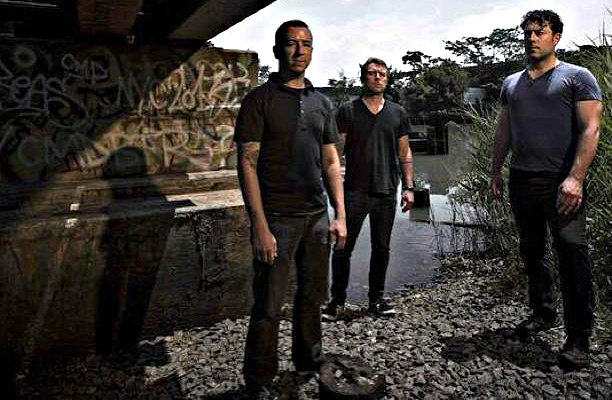 "A Visitation From The Wrath Of Heaven", the new video from the experimental, dark ambient/noise trio LOCRIAN, can be seen below. The eerie clip for the eight-and-a-half-minute-long track was directed by J.P Bradburn.

Terrence Hannum (keyboards/vocals) commented: "John Bradburn has crafted a nightmare like vision from our song by flipping personas, timelines, settings to muse upon the nature of surveillance and identity."

"A Visitation From The Wrath Of Heaven" is taken from LOCRIAN's latest album, "Return To Annihilation", which was released in June 2013 via Relapse Records. The CD was recorded by Greg Norman (PELICAN, RUSSIAN, CIRCLES, SERENA MANEESH) at Steve Albini's Electrical Audio Studios in Chicago and was mastered by Jason Ward at Chicago Mastering Service.

A two-part concept album inspired by LOCRIAN's love for prog-rock progenitors GENESIS, YES and KING CRIMSON, "Return To Annihilation" is described in a press release as "the group's most ambitious recordings to date."

LOCRIAN lyricist/multi-instrumentalist Terrence Hannum comments on the album's concept: "I think for the album concept we were inspired by GENESIS' 'Lamb Lies Down On Broadway' and how it is a surreal narrative telling a story. We sought to make our own but we wanted to give our nod to the prog bands that inspired us; KING CRIMSON or YES with the multi-part songs. So we had looked at the novel 'Dhalgren' by sci-fi writer Samuel Delaney as a big influence too. How it is a circular narrative, ours is more of a mirror of itself, one that changes and shifts. It also borrows extensively from Walter Benjamin's 'Arcades Project'.

"Our story is about a cataclysm that changes the world and all manner of perception in two parts. I would say the real and the perceived. And it is all told to you through a narrator, one who you cannot tell if he is asleep or dreaming or sleepwalking through this shifting landscape. Part 1 begins at the end of a song whose lyrics discuss a dawn in which all of our monuments dissolved, the next track the wrath of heaven (a massive cataclysm) visits earth, then two moons appear in the sky (perhaps the most direct reference to Delaney's novel but also an homage to Nick Drake). It ends with the first multi-part track 'Return to Annihilation', a more metaphysical description of the changes apparent in the world. One in which minerals work against man, there is only evolution. We also gain insight into that what we've been told may be unreliable as the narrator admits to 'noctambulism' (sleepwalking). But it is intentionally unclear if this is his state or the state of everyone. Part 2 is a view back through this mirror or lens of Part 1. We exit the hall or vapor and light and enter a panorama of mirror, the entire world as reflection. It ends with a four-part piece about worshiping equilibrium in a world where it has been extinct (isostasy), discussing the qualities of the air that is now poisoned, witnessing the burial of urns (hydriotaphia) and finally awaking to awareness.

"One of the things we wanted to accomplish was a sense of texture with mirrors, prisms, lenses, etc. being referenced in the sounds and tone. I think it does."

Formed in late 2005, LOCRIAN consists of André Foisy (electric and acoustic guitars, arp avatar, electronics), Terence Hannum (vocals, synthesizers, piano, organ, mellotron and tapes) and Steven Hess (drums, electronics). The group, located in Chicago, Illinois and Baltimore, Maryland, has released over 20 recordings on an eclectic array of labels in their relatively short but prolific career, including a split with labelmates HORSEBACK.

01. Eternal Return
02. A Visitation From The Wrath Of Heaven
03. Two Moons
04. Return To Annihilation
a. Into One Light
b. Anathemata
c. All Mineral in Upheaval

05. Exiting The Hall Of Vapor And Light
06. Panorama Of Mirror
07. Obsolete Elegies
a. Isostasy
b. Digression of Air
c. Hydriotaphia
d. In Felsic Splendor