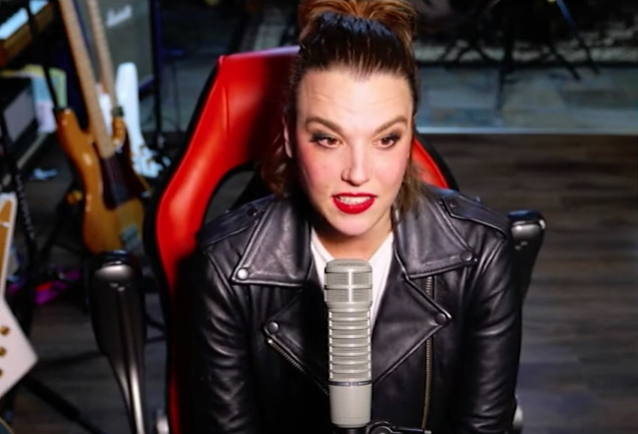 HALESTORM frontwoman Lzzy Hale spoke to Matt Pinfield of KLOS's "New & Approved" series about the songwriting sessions for the band's follow-up to 2018's "Vicious" album. She said (as transcribed by BLABBERMOUTH.NET): "It's been a roller-coaster ride, because we were writing for the record and actually getting together right here in my home studio every single day before the [coronavirus-related] lockdown happened, which I think tomorrow marks a year to the day when all that craziness started. So we were getting together and we were writing songs, and then, slowly but surely, it just felt like every single day we were getting more bad news, and we just basically made a decision, like, 'Okay, guys, until this blows over ' — [laughs] which we thought it was going to blow over — 'let's everybody just stay at home.' So the songwriting process kind of became more or less this relay sport, where it would start with myself or myself and my guitar player [Joe Hottinger], and then we would pass it off to Josh [Smith, bass], the bass player, and [eventually] send it to Arejay [Hale, drums]. And so we just ended up building up this kind of Dropbox of ideas. And then we started including our producer, Nick Raskulinecz, in all of these ideas, and so we'd go back and forth with that. And then, finally, just a couple of weeks ago, we got asked to perform THE WHO's 'Long Live Rock' for the documentary 'Long Live Rock'. And so that was kind of our, 'Okay, well, we have to get together and do this in a real studio. So everyone get tested, and everybody wear your mask the whole time.' And it was kind of like shaking off the dust — it was getting the band back together again. So it was kind of cool to initially break through with THE WHO song and then we started in on our actual material."

Regarding the lyrical themes covered in the new HALESTORM songs, Lzzy said: "I'm just now seeing this arc, because there were the songs that we were writing just kind of coming off the road, where it's very confident and very live and energy. And then it kind of starts to get — still keeping the energy up, but then subject matter starts to get a little crazier and maybe a little darker. And then it's kind of starting to dip into some more hope now. So I feel like, in real time, this is going to kind of be like almost a musical documentary of what we've gone through, through this past year and change."

"Halestorm Reimagined", a collection of reworked HALESTORM original songs as well as a cover of "I Will Always Love You", the love ballad made famous by Whitney Houston and Dolly Parton, was made available in August.

Lzzy and her brother Arejay formed the band in 1998 while in middle school. Hottinger joined the group in 2003, followed by Smith in 2004.

In December 2018, HALESTORM was nominated for a "Best Rock Performance" Grammy Award for its song "Uncomfortable".