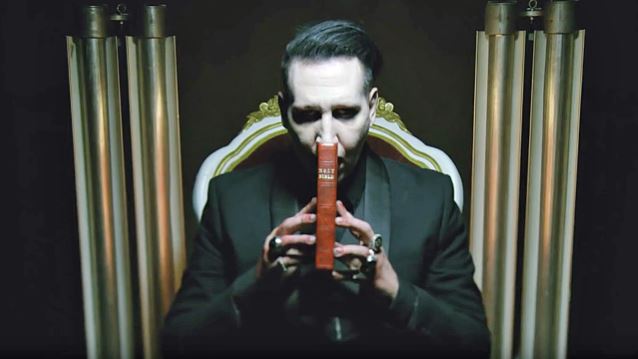 Marilyn Manson has announced a revised title for his new album, tentatively due later in the year.

Although Manson said in a 2016 interview that his follow-up to 2015's "The Pale Emperor" would be called "SAY10", he told Fabulous TV (see video below) at this past Monday's (May 8) premiere of the "King Arthur: Legend Of The Sword" film that his new disc is finished and is named "Heaven Upside Down".

Manson in April released several cryptic videos on his Instagram account which were thought at the time to be related to the release of his next album.

In November last year, Manson issued a brief teaser video for the track "SAY10" which saw him tear pages from the bible and focus on the bloodied body of a man in a suit — believed to represent then-Republican presidential candidate Donald Trump.

Manson revealed last September that his new album — which was originally expected in February — would be ""the last thing people would expect after hearing 'The Pale Emperor'." He explained: "Coming from the people who I've played it to, it's a combination of 'Antichrist Superstar' and 'Mechanical Animals' in feeling."

Manson added: "It wasn't my intent to go backwards. Everything goes in a full circle and it just becomes, without cannibalizing work from the past, the same thing, which is ultimately you. I'm a little over-anxious to release it, so it was done very quickly, but it's by far the most thematic and over-complicated thing that I've done. In a way, it's deceptively delightful to strangers. It's like the old saying that the devil's greatest secret is that people don't believe he exists."

Manson will begin touring again this summer, with a three-week European tour scheduled to kick off on July 20 in Budapest, Hungary.