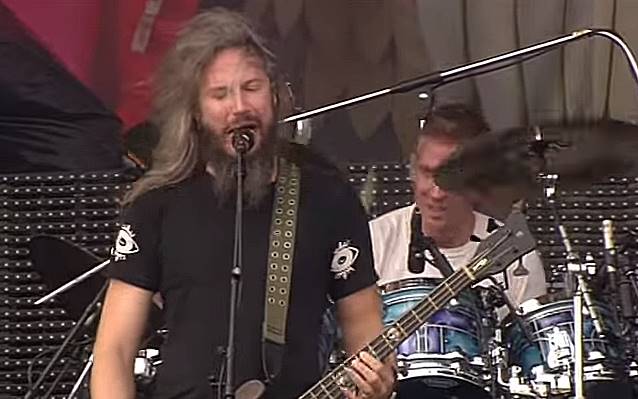 Professionally filmed video footage of MASTODON's June 9 performance at the Pinkpop festival in Landgraaf, The Netherlands can be seen below.

MASTODON's sixth album, "Once More 'Round The Sun", will be released on June 24 via Reprise Records. The follow-up to 2011's "The Hunter" was recorded in Nashville with Grammy Award-winning producer Nick Raskulinecz, who is known for his work with RUSH, DEFTONES, FOO FIGHTERS and ALICE IN CHAINS. Also available on June 24 will be a stunning deluxe 2LP vinyl edition of "Once More 'Round The Sun". This limited edition will include two discs pressed onto 180-gram black vinyl housed in a quadruple gatefold vinyl jacket featuring artwork by Skinner, plus a CD of the complete album. The package will include four exclusive lithographs derived from the album artwork.

MASTODON singer and bassist Troy Sanders told Paste Magazine about the "Once More 'Round The Sun" cover artwork: "It's... a work of art for sure. It's... very eye-opening, very striking. It's from another dimension, and a lot of our music is geared toward that idea — taking you to another planet on songs. It's out there, and I think it's incredible."

Regarding the new MASTODON album title, Sanders told Paste Magazine: "The idea was generated before we recorded the title track on the record, but the title was thought up many months ago.

"After we finished the two-year touring cycle on our last record, 'The Hunter', we were kind of gearing up to go back to our rehearsal space in Atlanta. And we were starting the effort, the time, the blood, the energy, the months of driving, the recording and the long process between recording and the release day.

"In a nutshell: we're fortunate enough to do this again, but there's this feeling of this yearly cycle. It's not a bad thing. We get to go tour a bunch, we get to record a bunch of songs we love. It's embracing the positive — the wonderful side, to be able to have the same four dudes who love doing what we do so much. And like anything in the MASTODON world, it's open to interpretation."