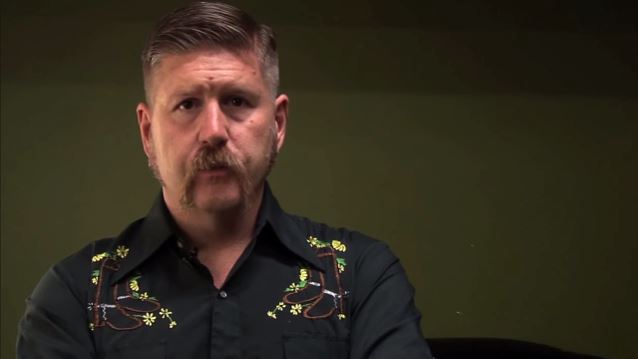 Atlanta progressive metallers MASTODON have purchased a rehearsal building in the West End area of their hometown and are working on turning it into a place that will house about twenty individual rehearsal spots.

MASTODON guitarist Bill Kelliher is overseeing the project, which came about after two rehearsal studios, Thunderbox and Avatar Studios, closed last year. He told Creative Loafing: "Even before it went away, I could see it coming from miles away — years beforehand. So I started looking at buildings, but it never came to anything mostly because of time. I tour a lot. Now I'm home and the time is right for me to get all of this wrapped up."

He continued: "There's such an opportunity here, and there's a lot of need for it. I'm sure I'm not the only person who's thinking about this, so I'm willing to bet we will see more places like this coming up in the future. But I want to make mine a little more special. MASTODON will be here. We'll have our name attached to it, which is a really cool thing. We draw a lot of water in this town, I guess. So for whatever that's worth, I like to use that to interact with people — musicians."

MASTODON closed on the rehearsal facility — which will be called Ember City — on Saturday, and Kelliher said that he already heard from about thirty bands in the first day since he wrote about it on his Facebook page. He said: "For now, I'm aiming all of my guns at getting every room upstairs built, and making sure the city is cool with everything. Then I can start thinking about building a deck out back, maybe a basketball court, a garage, put in a foosball table, maybe a pool table, and all of the cool additional things. But all of my energy is focused on getting the remaining stuff out, and building rooms. There's a lot of HVAC work that needs to be done, a lot of electrical work ... There's so much work that goes into designing simple, square box rooms."

Although Ember City is a MASTODON-owned operation, Kelliher confirmed that he is the point man for the project. "I've just spearheaded the whole thing," he said. "I've been on the frontline, and it's been my dream for many, many years. I know the guys in the band have always wanted to do the same thing."

He added: "We all tend to agree when it comes to a vision, and a lot of other things. We're all good friends, and we all see eye-to-eye. When I brought this idea to them, everyone was, like, 'Hell yeah, this is a great idea.' But I've been steering the ship in terms of finding the building and going through all of the legwork. I will continue to do that until we get our first tenant in here."