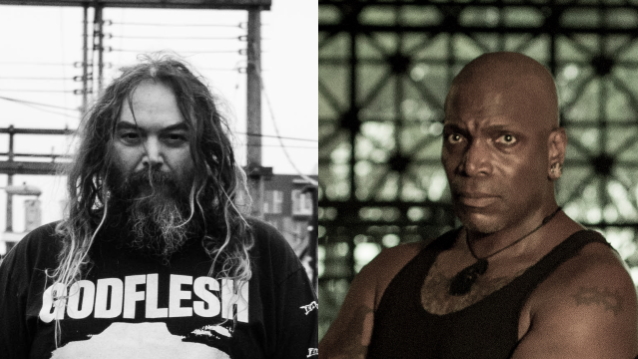 Gloria Cavalera, wife and manager of founding SEPULTURA guitarist/vocalist Max Cavalera, has blasted the band's current frontman, Derrick Green, for comments he made in a recent interview about a possible reunion with Max.

SEPULTURA's classic lineup fell apart in 1996 with the exit of Max after the rest of the band split with Gloria as their manager. His brother, drummer Igor Cavalera, stuck around with the group for another 10 years before leaving SEPULTURA and re-teaming with Max in CAVALERA CONSPIRACY.

Although SEPULTURA has maintained a diehard fanbase in all parts of the world throughout the band's three-and-a-half-decade-plus history, Max-era albums "Roots" and "Chaos A.D." were by far SEPULTURA's most commercially successful, having both been certified gold in the U.S. for sales in excess of five hundred thousand copies.

When he was asked in a recent interview with the "Scars And Guitars" podcast why he thinks SEPULTURA still gets asked about a possible reunion with Max, Derrick said: "I think for some people, it's hard for them to really move on. It's hard for people to change in general — for the fact that they're fearful of change, because of the unexpected when changing. It's hard for certain people, but that's okay. It's not where we're at musically, and thank god that we were able to move forward and not only rely on the past. I think it's natural for certain people that they gravitate to something that they've known from the past, and maybe that's just where they like to have their heads."

He continued: "I never wanted to be in that position, just because I'm an artist and, for me, it's important to really explore and to evolve, and change is actually necessary. And that's something that's happening in all of our lives, so I accept it and go with it and living within the moments that are happening now."

Derrick added: "I don't worry too much about other people and them being trapped in the past. It's just something I don't wanna be a part of or be near that. [Laughs]"

Earlier today (Monday, February 3), Gloria took to her personal Facebook and made a public post, writing: "Hey I have a shout out! Fuck You! Max and Iggor never ever talk about a reunion. Why do you think they left? Lol. You're needing to talk about Max and Iggor to get some press?? Yeah it is hard for YOU to move on! Max and Igor can Return to their Roots and all you can do is sing lyrics my husband wrote!"

When one person commented under Gloria's post that he thought Derrick "was fair" in his remarks, she fired back: "fair? Jesus Christ save us." Another person then asked Gloria why the remaining members of SEPULTURA didn't change the name of the band after Max's exit. She replied: "Well I could speculate but the truth pisses people off. We all know why they can't change the name. The question is ...if Max is the person they insist he is, why sing his lyrics? I didn't see anyone sitting at the kitchen table writing lyrics except Max and one time he was with [Max's late stepson] Dana."

SEPULTURA bassist Paulo Xisto Pinto Jr. recently said that he has had "zero" contact with Max, adding that a reunion with the band's original frontman would have to happen "naturally."

Back in 2017, Igor Cavalera told The Salt Lake Tribune that he and Max "believe SEPULTURA doesn't really make sense nowadays, to do what they're doing." The drummer also downplayed the possibility of a reunion of SEPULTURA's classic lineup, saying: "Unless it's something really solid — and we haven't seen that from their part — of doing something totally professional and coming together, trying to do something like that. At the end of the day, it would be special for the fans, so it's not like a closed door, but at the same time, we have no time to spend energy with this kind of thing. So we just move forward."

Max echoed his brother's sentiments, telling The Salt Lake Tribune that he doesn't even think about his former bandmates much. "For a time — for a long time — there was a war in the press, like, 'He'll talk this, I'll talk that,'" he explained. "I got really tired of it, honestly. I'm not gonna do that anymore. So let them go their way and do their thing, and we're gonna do our thing, and I think that's the best for everybody."

While stopping short of completely ruling out a reunion of SEPULTURA's classic lineup, Max said: "Right now, we don't even need it. It's been so much of that kind of bad vibes through the years that I don't even know how that would even really work out. I think what [Igor and I] are doing is the closest thing to that, and it works great, it works like a charm. It's amazing."

SEPULTURA's new album, "Quadra", will be released on February 7 via Nuclear Blast Records.

Hey I have a shout out! Fuck You! Max and Iggor never ever talk about a reunion. Why do you think they left? Lol....